(Milton, DE) – Dogfish Head is introducing a new artist and beer lineup for the Off-Centered Art Series and is ready to kick it off with the October release of the beloved 75 Minute IPA in 12oz/6pk bottles. A classic IPA brewed with maple syrup from Sam Calagione’s (founder and CEO of Dogfish Head) family farm, the beer was continually hopped during the entire boil, and then dry hopped with a slew of cascade hops. Golden amber in color, 75 Minute IPA is malty and earthy with citrusy-piney notes, balanced with subtle maple notes. The beer began as a cask-conditioned ale at the Rehoboth brewpub in ’11; the ’18 version of 75 Minute IPAis a new evolution of this cult-favorite IPA. 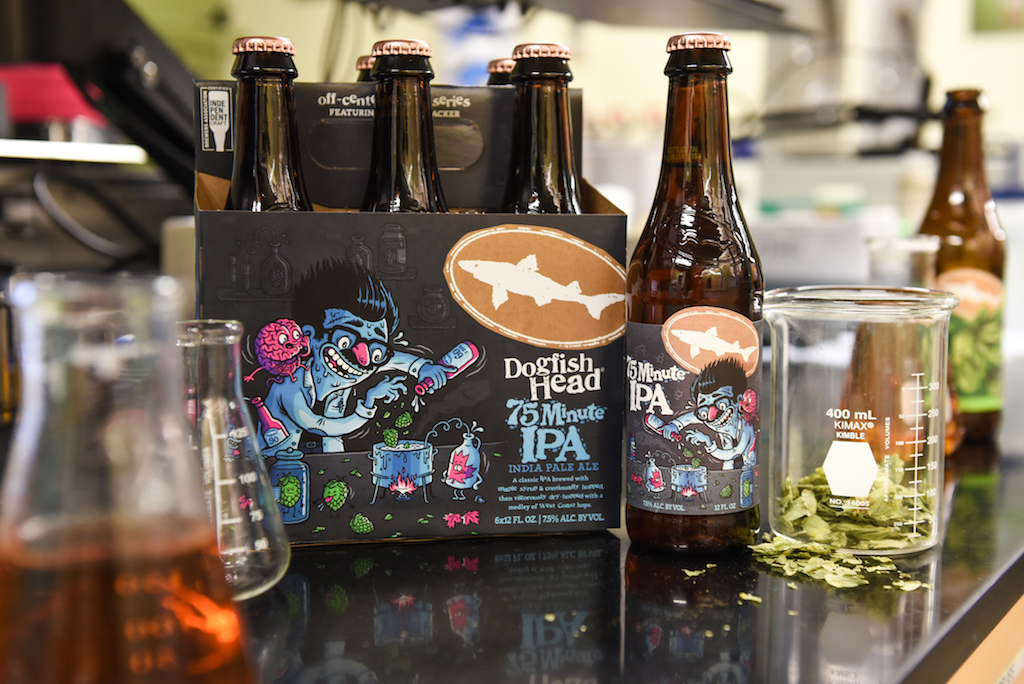 Dogfish Head’s Off-Centered Art Series is a lineup of four beers representing the creative expression that occurs at the intersection of ales and art, featuring a new illustrator each year. “Creative beer labels have become a fun focal point of the craft beer scene, defining brands and bringing beers to life through visuals,” said Calagione. “Since 2008, we’ve been collaborating with wildly inventive illustrators from around the world, and I couldn’t be more excited to continue the tradition with our friend, Michael Hacker, as we visually share new stories about our inventive beers.”

The Off-Centered Art Series artist, Michael Hacker, created the artwork for the beers. A talented freelance illustrator, Hacker finds inspiration for his Art Series illustrations by learning the unique and compelling stories behind each beer, then bringing them to life visually in his own style. Since 75 Minute IPA is a combination of two Dogfish innovations in continual hopping – 60 Minute IPA and 90 Minute IPA – Hacker wanted to artfully portray the brewing process with Calagione as the original mad scientist of the early craft beer movement. His imaginative style incorporates a few hidden gems, including a “funny glasses” disguise that was part of the original Johnny Cask packaging artwork. “The fake glasses and rubber nose disguise are a nod to the original 75 Minute label design, and to make things a little weirder, I added a brain whispering into the scientist’s ear, along with a Delaware Blue Hen (state bird of Delaware) watching the whole scene thirstily,” said Hacker.

The Off-Centered Art Series beers will roll out over the next 18 months and includes: 75 Minute IPA, The Perfect Disguise (8%) – an American double dry-hopped IPA disguised as a Kölsch,Dragons & YumYums (6.5%) – a lip smackingly tropical pale ale, and Punkin Ale (7%) – a full bodied brown ale brewed with real pumpkin.