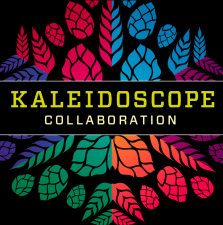 (Belmont,CA) – The initial idea was to just have an event where all of the breweries following their passion and brewing their beers at Devil’s Canyon could showcase their individual creations, but then the idea of brewing a collaboration beer between not just one or two – but all of the breweries – was just too good to pass up.

What happens when you throw a group of creative brewers (Triple Voodoo, Pacific Brew Labs, High Water Brewing, Golden Mongoose, Phat Matt’s, Two Monkeys, MyBucha, Red Cup Lager, & Devil’s Canyon) in a room with the direction to design and brew a beer that reflects some of their favorite ingredients, brewing styles and techniques?… KALEIDOSCOPE HAPPENS

Starting with the general framework of an IPA, the group gravitated toward these malt elements:  Pale malt, crystal malts, biscuit malt, oatmeal, roasted wheat, rice and a few other surprises were selected. To make things really interesting, Green and Black Teas were added to the mash.

For the hop additions, an “inventory clean up” approach was undertaken; a little of this, a little of that.  The bitterness levels were kept on the lower side to allow the tea and whirlpool additions to come through.

And speaking of whirlpool additions… dried currant and Grain of Paradise were added to play off the unique flavors contributed from the mash.  Throw in some English Yeast and the beer was underway.

The result is a dark ale with the look of a dark roasted beer but sublimely smooth and complex from the varied layers of malt and special ingredients.  Please enjoy our creation and raise a toast to the spirit of collaboration and Kaleidoscope!

No matter how you spin it, you’re gonna’ love the view!!

Look for our 2012 Kaleidoscope Collaboration at the SF Beer Week Opening Gala, on tap at select locations for SF Beer Week and the “Kaleidoscope of Craft Beer Micro-Gala” event at the brewery on February 17th from 5-11pm