Details on Newest SweetWater Dank Tank: The Price is Wrong 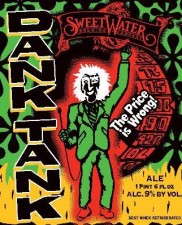 C’mon down! Captain Danky is back with a Belgian Behemoth courtesy of Boob Barker. The latest from our one-off Dank Tank series of wonders comes “The Price is Wrong” – a funky Belgian Strong Pale Ale that’ll put a whuppin’ on you starting this August. This biggun’ will be barreling out in bombers and on draft in the upcoming weeks. Y’all know the deal, it’s a limited run, so get your hands on ’em while ya can.

Workin’ as a caddy at Bushwood, El Danko was stoked to ﬁnd out he would be shouldering Boob Barker’s bag. Figuring Boob was a swell guy who liked to have fun, El Danko slipped an exploding golf ball onto the ﬁrst tee. Boob was so enraged after the ball blew, he threw a haymaker at El Danko and broke his high heel. Fearing a big lawsuit and being hammered in the tabloids, Boob offered him a rigged spot on the Price is Wrong to keep him quiet. Sure enough, down in Studio City 42 days later, Rod Roddy bellowed out to El Danko “C’mon down!” He was ecstatic as they wheeled out some fancy leather chaps and some extra crisping hair mousse, which he just purchased last week. Bidding $420 on the lot, El Danko nailed it! With a kiss from Barker ’s Beauties as the bonus, he strutted on stage and with a wink he gave a slap on the ass to Boob Barker himself.

On to the big prize, El Danko was confronted with the infamous Cliff Hanger climb! Just as the yodeler was about to cliff dive off the ledge, he came to a screeching halt. The Dankster had pulled it off, winning the prize behind Door #2: Pimpin’ high heels and some private time behind Curtain #3 with Ester-y, the Belgian Barker Beauty, who 9 months later delivered the biggest surprise of all! Blam!!! El Danko is a dad living in Belgium. Jobless, he got a gig at Ester-y’s family brewery to pay for his Price is Wrong love child, Bar nold Schwarzenkegger. The Boob Barker Belgian Behemoth Boogieboy. Benjoy!

Living large with his 7 year squeeze, Capt. Danky was suddenly blindsided as he discovered General Betrayus under the sheets with his ho. Unstable,delirious, and in desperate need of relief, he headed to the Cheetah to drown his sorrows with a few motorboats. After his wallet was drained by a lovely dental hygienist student, she whispered in his ear the 411 on a swinging late night dance club called Johnny’s Hideaway where he might get lucky. Wearing his big boy pants, he jumped in the first cab and beelined it to the hopeful honey hole. A Stupefied Capt. Danky slipped in and was immediately pounced on by the house mama who set her meat hooks into him to do a little dirty dancing. Capt. Danky was swept off his feet by this big ol’ beauty and lured back to her cougar den for some Danky Spanky.Capt. Danky awoke with an ear to ear hickey and massive claw marks on his chest, back,and sack-a-jo-wia. He slowly rolled over and uncrusted his eyes, hoping to figure out what was saddled up next to him under the leopard skins heets. As his vision cleared, he gagged, learning  he had “seasoned” a big fat black double IPA.Horrified, he grabbed his ring off the nightstand and jumped out the window before it was awakened ready for round two. Here’s to hoping his buddies never discover his bag-age.