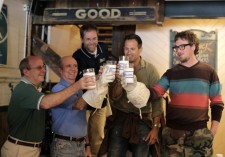 (Rehoboth, DE) – The newest small-batch beer from Dogfish Head, released Sunday to celebrate the fall equinox, is out of this world.

Celest-jewel-ale is made with lunar meteorites that have been crushed into dust, then steeped like tea in a rich, malty Oktoberfest. These certified moon jewels are made up primarily of minerals and salts, helping the yeast-induced fermentation process and lending this traditional German style a subtle but complex earthiness. (Or is it mooniness?)

Our friends up the road at ILC Dover, a company that creates space suits for NASA, helped us get this unique and incredibly rare ingredient. We also used German malts and hops, and fermented this beer with our house Doggie yeast, giving Celest-jewel-ale notes of doughy malt, toasted bread, subtle caramel and a light herbal bitterness.

Exclusively served at Dogfish Head’s Rehoboth Beach brewpub, Celest-jewel-ale marks the September night of the harvest moon – the full moon closest to the fall equinox – whose brightness has traditionally helped farmers work into the evening.

On top of the lunar meteorites, ILC is making sure this is the best-protected beer on the planet with koozies made from the same material as their space suits. The outer layer is Orthofabric, which is specially woven to have white Gore-Tex® PTFE on the exterior and Nomex® with a Kevlar® ripstop on the interior. The Gore-Tex is slippery to prevent friction between parts of the suit during movement and facilitate mobility. Its color also limits the absorption of solar energy.

The Nomex is for fire protection, and the Kevlar prevents tearing. The aluminized Mylar® insulation layers inside the koozie maintain a comfortable thermal environment. In space, they reflect the sun’s energy out when in sunlight and the astronaut’s body heat in the suit when in shade. The foam inside the koozie is polyurethane, and in its day job provides a comfortable interface between the astronaut and the space suit in padding. The inner layer is polyester, which is the layer of the space suit that provides structural integrity and mobility joints when pressurized.

All the materials in the koozie can withstand the rigors of space including temperatures ranging from +250/-250F, micrometeoroid traveling at 10 miles per second, solar radiation and the vacuum of space. Just as these materials surround astronauts and keep them at the optimal temperature, they will do the same for beverages.

We have 10 of these space-age koozies, and they’re a little more valuable than your average foam jobbie, so you’ll have to hand over your license and drink your Celest-jewel-ale at the bar. We’ve gotta keep these beauties grounded!

Celest-jewel-ale, at 5% ABV and 25 IBUs, is available now at Dogfish Head Brewings & Eats. But if you want a taste, make haste. When it’s gone, it’s outta this world forever!

About ILC Dover: Since 1947, ILC Dover has been active in the design and development of products for both government and industry. Most ILC products are comprised of softgoods materials – products that are flexible by nature and result in innovative solutions to customer problems. On Friday, Sept. 20, ILC Dover was presented with an award by the American Society of Mechanical Engineers designating the Apollo space suit as a “Historical Mechanical Engineering Landmark.” The Apollo space suit was developed and produced by ILC between 1962 and 1974 and allowed 12 men to successfully walk on the moon.

Oakshire Brewing – What Are They Bringing to GABF? What is Smuttynose Brewing Sending to The Great American Beer Festival?