(Normal, IL) – DESTIHL Brewery and HANSON BROTHERS BEER Co. will be debuting an exciting collaboration, Pink Moonlight Peach Milkshake IPA, at The Hop Jam Beer & Music Festival on May 19th in Tulsa, OK. The beer will also be featured at The Hop Jam Firkin Feast Beer Dinner on May 18th. 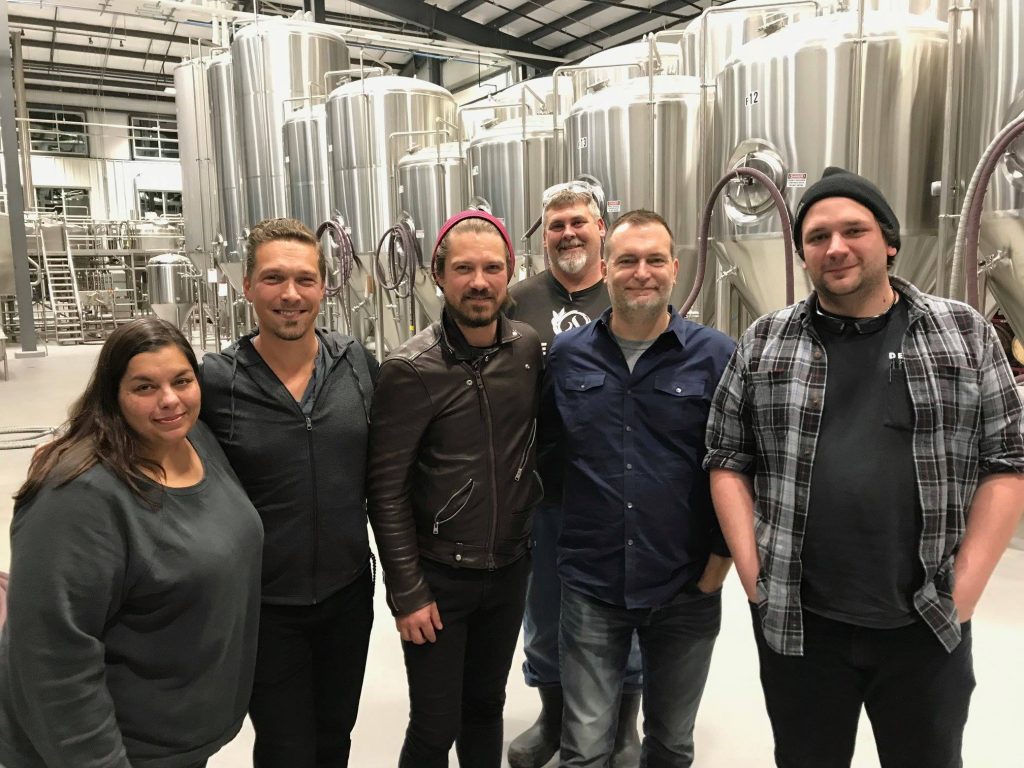 DESTIHL’s co-founder, Matt Potts, originally met Taylor, Isaac and Zac Hanson when drumming with them (along with Kyle Hollingsworth of String Cheese Incident) over a three-year stint of The Intersection of Beer & Music Presentation at the Great American Beer Festival®from 2014 to 2016. DESTIHL launched its beers in Oklahoma in 2016 and has been participating in Hop Jam every year since then. The HANSON BROTHERS stopped by DESTIHL Brewery for a visit and tour last fall in between shows, which is when the beer collaboration really came together. “This exciting collaboration has produced the ultimate culmination of the intersection of beer + music between DESTIHL and HANSON, and it’s been a fun project that’s likely just the beginning of more great beers to come”, said Matt.

In discussing the beer, Taylor Hanson noted “For inspiration in naming this collaboration, we looked to one of our songs, ‘Penny And Me’, which references Pink Moonlight, as a subtle nod to the peaches and lactose in this beer. Our connection with Matt and the DESTHIL team is personified in this special collaboration, fusing our love of craft beer and music. There could not be a more perfect time to share it than at the Hop Jam Festival which is all about the connection between those two worlds.”

Pink Moonlight Peach Milkshake IPA will inspire you to gaze at the starry skies while enjoying this collaboration, loaded with fruit flavors and aromas from peaches, Mosiac, El Dorado and Amarillo hops, and a light creaminess from lactose.

Pink Moonlight Peach Milkshake IPA will be available for a limited time in draft and 4 pack-12oz cans exclusively at select retailers in Oklahoma beginning the week of May 20th and at DESTIHL Brewery’s Beer Hall in Normal, IL beginning on May 17th.

The Hop Jam, Oklahoma’s largest craft beer and music festival features a roster of 100+ breweries and an all-ages, free concert. Set to take place on two stages on May 19, the 2019 Hop Jam will be headlined by festival founders HANSON and indie rock powerhouse, Phantom Planet.

About DESTIHL
DESTIHL opened its first gastrobrew pub™ (DESTIHL Restaurant & Brew Works) in Normal, Illinois, in November 2007 and added its second location in downtown Champaign, Illinois, in April 2011, where the company focuses on both artisan food & beers. The company’s original production brewery in Bloomington, IL commenced operations in May 2013, but production was moved to its new 47,000sf Brewery & Beer Hall in Normal, IL, which opened to the public in May 2017. DESTIHL Brewery combines centuries-old, global brewing traditions and new American craft brewing ingenuity & artisanship to produce a wide array of beers for every palate. The result is a diverse offering of intensely flavorful beers that are anything but bland. The brewery currently distributes its beers internationally and in over 30 states, with more to come.

About HANSON BROTHERS BEER Co.
HANSON BROTHERS BEER is a craft beer business founded by brothers best known for 25 years in music as the band HANSON. Since 2013 the craft beer outfit has been sharing award-winning styles at the crossroads of their passion for music, community and craft beer, further personified by the Hop Jam Beer and Music Festival, which they founded in 2014. Their motto is simple, Beer + Music = Awesome.