(Bend, Oregon)  – The Jubelale tradition carries on with custom artwork wrapping the outside of the bottle and warm spiciness, dried fruit, malty caramel and a hoppy finish inside the bottle. The 2016 vintage of this winter seasonal beer features a piece by Bend, Oregon artist Karen Ruane entitled “First Snow”. The artwork, which was created through a centuries-old process called marbling, was inspired by the highly anticipated first storm of the season. 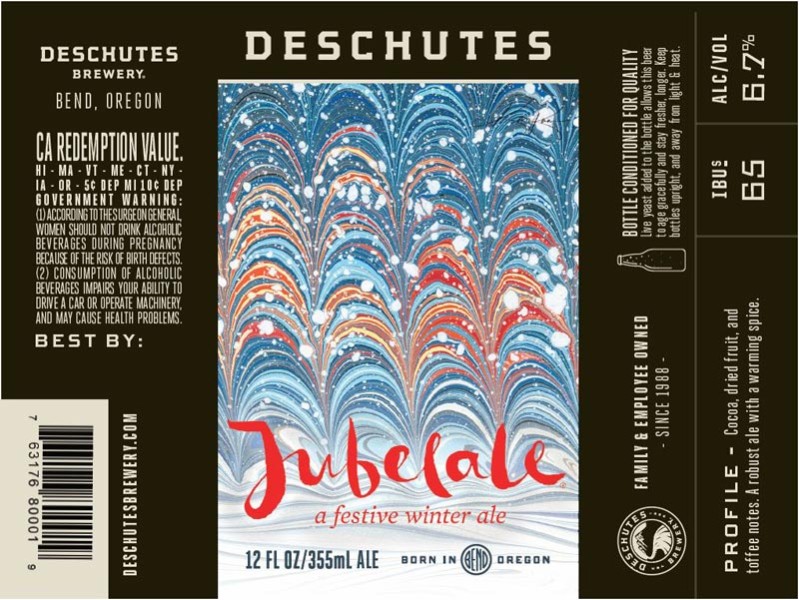 Ruane said, “With this piece I wanted to capture the change in the air, the smells, the excitement and festive atmosphere around the anticipation of playing in the first snow of the season. I absolutely love the packaging, and am so honored to have my artwork featured on it. I think the designers did a wonderful job showcasing the art of marbling and I hope that this rather rare art form is able to get a little attention from this year’s Jubelale.”

Marbling originated both in Asia and Eastern Europe, where they called it Ebru (translated to ‘like a cloud’) and from there made its way into Western Europe and the rest of the world. The process uses a viscous fluid, most often water thickened with a type of seaweed. Ruane uses thinned acrylic paints and then applies them to the surface of this fluid. She then manipulates the paints into patterns and designs. The process is completed by laying a sheet of treated paper over the top of the fluid to take a single contact print. Each piece is therefore totally unique, including “First Snow”.

For its 29th bottling, Jubelale once again brings fans the perfect brew for holiday celebrations. The beer is unique to many of Deschutes Brewery’s other beers in its malty and dried fruit character, along with the use of EKG hops which are lightly herbal and spice. This enhances the flavor profile and balances the malt for Jubelale.

Deschutes Brewery brewmaster Veronica Vega said, “Out of all our seasonals, Jubelale gets the most conversation about differences from year to year. I personally think this is tied to the amount of special memories that are created during this time of year, when the beer is consumed. So every year, the sentence ‘best year ever’ is repeated throughout the season in our brewery.”

About Deschutes Brewery
Named as OUTSIDE’s Best Places to Work for the last three years in a row and winner of the 2015 Oregon Sustainability Award, Deschutes Brewery was founded in 1988 as a brew pub in Bend, Oregon. Still family and employee owned 28 years later, the brewery is known for brewing a diverse line-up of award winning beers including the popular Fresh Squeezed IPA, Black Butte Porter, and Mirror Pond Pale Ale. From the beginning, the focus has been on crafting the best beer and food using thoughtfully curated ingredients. With a second brew pub in Portland’s Pearl District that has become a popular destination for craft beer lovers from around the world, Deschutes Brewery now ships beer to 28 states, the District of Columbia, and internationally from its main brewing facility located on the banks of the Deschutes River. To find out more, visit www.DeschutesBrewery.com.