(Portland, OR) – Deschutes Brewery, a family and employee owned craft brewer founded in Oregon in 1988, today unveiled the launch of Rip City Lager, a specialty release in partnership with the Portland Trail Blazers to coincide with the revival of the NBA’s season. Deschutes, the presenting sponsor of the Portland Trail Blazers Radio Network since 2019, has created this custom co-branded beer for Blazer fans in celebration of the fellow Northwest icon releasing this September. 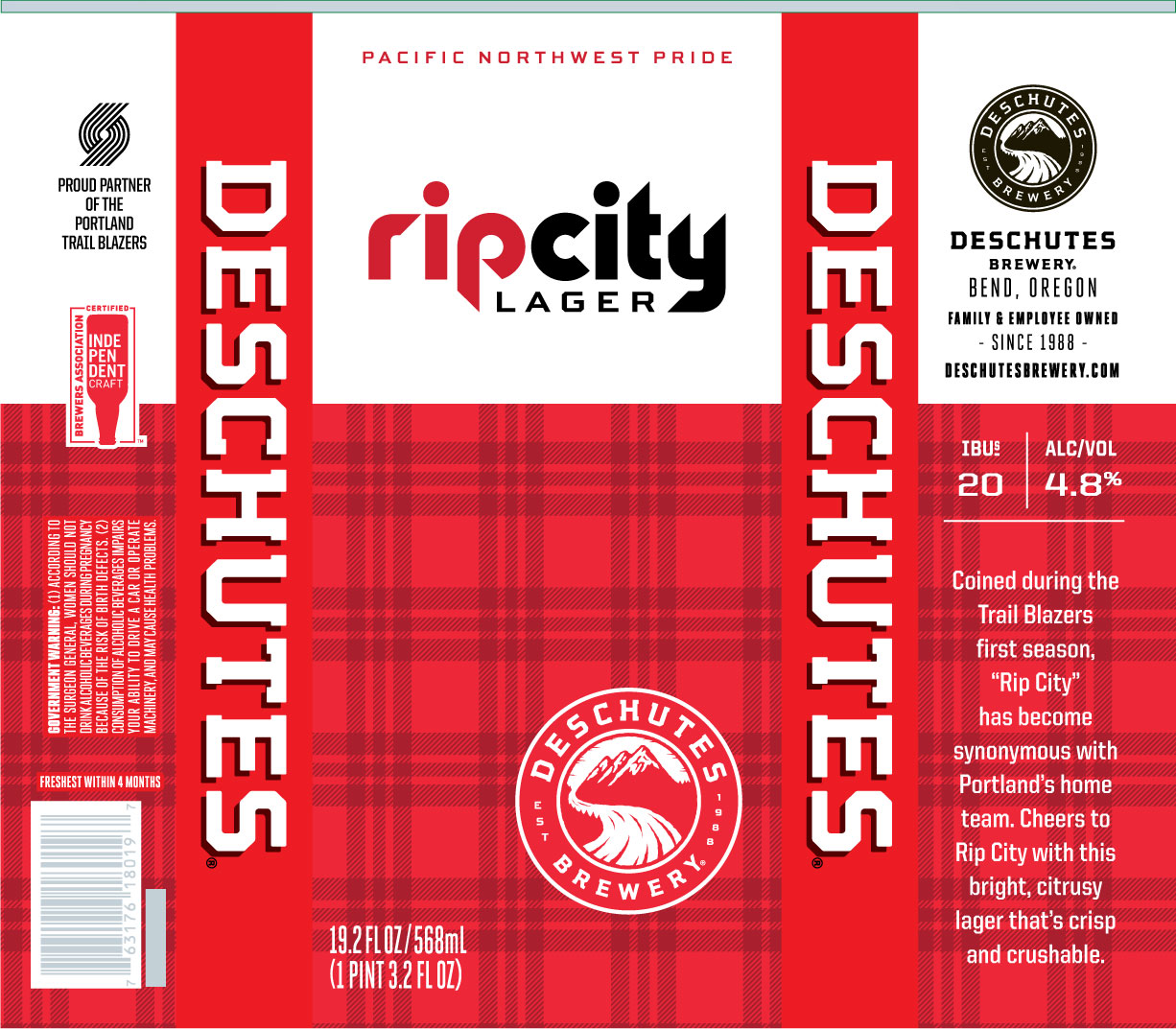 “We’re ecstatic that the Blazers get to restart the 2019-20 season,” said Neal Stewart, VP of Sales and Marketing for Deschutes. “As lifelong Blazers fans, all of us at Deschutes are so proud of this partnership and the opportunity to share the official Rip City Lager with fellow fans to celebrate our beloved Pacific Northwest team.”

Coined during the Trail Blazers very first season, “Rip City” has become synonymous with Portland’s home team. Rip City Lager, an ode to this Portland heritage, is a bright, citrusy lager that’s crisp and clean for ultimate drinkability. “Sports fans have a more sophisticated beer culture these days,” Stewart continues. “Fans want a great tasting, high quality craft beer that they can enjoy throughout the game.”

Specially brewed with watching the games in mind, the packaging is adorned in true Rip City fashion, featuring plaid cans in salute to Dr. Jack Ramsay, the Blazers’ longtime coach who led the team to the NBA title in 1977. Two designs, “home” and “away” jersey cans, will be available in 6 packs, 12 packs and 24 packs in the market.

“Deschutes has been an Oregon staple for over 30 years, and we’re honored to be a part of their journey,” said Chris McGowan, President and CEO of the Trail Blazers and Rose Quarter. “From the name to the can design to the packaging, the Rip City Lager doesn’t miss a detail and is a perfect partnership for our of-age fans.”

Deschutes is confident this continued partnership, coupled with the release of Rip City Lager, will enable the brewery to reach their beer-loving sports fans whether tailgating, watching from a barstool, or the comfort of their couch during televised games, and will be waiting for them at Blazers games as soon as they’re back at Moda Center.

Rip City Lager features Lemondrop, Crystal and Hallertau Mittlefruh hops and is 4.8% ABV and 20 IBU. Available on draft at Deschutes Pubs and Bend Tasting Room in August, Rip City Lager will then release in 6pk, 12pk, 24pk and 19.2oz tallboys at select accounts in Oregon and Washington in September.

Members of the National Basketball Association (NBA), the Portland Trail Blazers were founded in 1970 and purchased by the late Paul G. Allen in 1988. The team’s rich heritage includes 35 playoff appearances, three trips to the NBA Finals, an NBA championship in 1977 and a commitment to community service and sustainability. The Trail Blazers are dedicated to positively impacting underserved kids and their families throughout Oregon and Southwest Washington where they live, learn and play. Portland is the first and only professional sports franchise to receive the prestigious National Points of Light Award for excellence in corporate and community service. The Trail Blazers home arena, Moda Center, is the first existing arena to earn LEED Platinum Certification in 2019 after receiving LEED Gold Recertification in 2015 and becoming the first existing professional sports venue in the world to receive LEED Gold status in 2010. The team is also one of the founding members of the Green Sports Alliance. For more information, visit trailblazers.com.