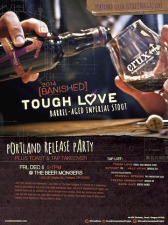 (Portland,OR) – Join Crux founder and brewmaster Larry Sidor at The Beer Mongers in Portland for a celebratory toast to the release of one of our most highly anticipated beers. The 2014 [BANISHED] TOUGH LOVE Imperial Stout is constructed with dark roasted malts, malted rye, and oak-smoked wheat, and then banished in Kentucky bourbon barrels, revealing notes of vanilla beans and hints of dried cherries. TOUGH LOVE will be available for sale on draught and in bottles (limit four bottles per person). Crux will also take over the taps with a selection of our favorite Crux beers, many of which don’t typically travel beyond our Tasting Room in Bend.

WHAT IS BANISHED? Banished Series beers are hidden away for months in oak barrels, allowing flavors to mature, meld and mellow. Some beers in this series also contain live yeast, making them good candidates for cellaring at home.

WHY THIS BEER? As you may know, we designed our 11,000-hectolitre brewery to allow for non-traditional brewing methods like oak barrel aging, wild yeast strains and experimental hops. This beer is an example of the long-awaited fruits of those labors.

ABOUT CRUX FERMENTATION PROJECT: Crux Fermentation Project is located at the epicenter of Bend and at the crucial core of the brewing process. We’ve designed our 11,000-hectolitre brewery to allow for non-traditional brewing methods like decoction mashing, open fermentation, oak barrel aging, wild yeast strains and experimental hops. All our beer is bottled and labeled by hand in small batches right at the brewery. Brewmaster Larry Sidor is always in pursuit of the next great beer, whether by reinterpreting a classic style or abandoning it altogether.