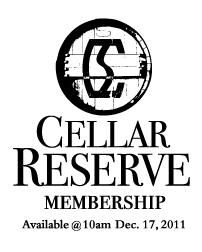 As a followup from the news that Crooked Stave will be starting up their Cellar Reserve Membership Program for 2012, here are all the important details, including how you can get your membership this Saturday, December 17th. Cheers!

If you are located out of Colorado and choose to have someone other than yourself pick up your Cellar Reserve allocations, you must email [email protected] with the name of your designated trustee who is the person responsible for picking up your beers.

**Please note that a few of these beers will likely be available to the public for purchase. As a Cellar Reserve Member you are guaranteed the first opportunity to purchase these beers, to some limitation, before they go on sale to the public.

DISCLAIMER: Crooked Stave Cellar Reserve Memberships are open to USA residents over the age of 21 only. If you reside outside of Colorado and decide to purchase a Cellar Reserve Membership make sure to designate a Colorado Trustee or you are responsible for picking up your allocation which will be held at the brewery until March 21st, 2013. We are unable to ship beer as FedEx, UPS, and USPS does not allow us to ship beer direct to customers. No refunds will be given after placing an order.

Get the most up to date info at http://membership.crookedstave.com