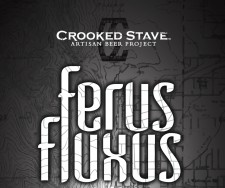 The Wild Belgian Pale Ale that has been aging separately at both Upslope’s North Boulder brewery at Lee Hill and Crooked Stave’s Barrel Cellar for the last nine months will be available in two different package options. Crooked Stave’s version will be packaged in its standard 375 milliliter bottle, while Upslope’s version of Ferus Fluxus will be packaged in Ball Corporation’s 19.2 ounce Royal Pint can.

“This collaboration was a great opportunity to reunite with my friends at Upslope and make a unique beer,” said Crooked Stave’s Head of Sales and former Upslope employee Kyle Krebsbach. “I have always thought our yeast would pair well with Upslope’s Belgian Style Pale Ale. Tasting the beer yesterday, I loved the crisp floral and citrus flavors followed with a nice tart and earthy finish.”

“It’s exciting to be a part of the first installment of what’s sure to be an awesome series. With the completion of our production brewery, space was freed up at our original facility to expand our barrel-aging program and experiment with bacteria,” said Upslope head brewer Alex Violette. “The opportunity to collaborate with our friends at Crooked Stave was one we couldn’t pass up. We all agreed that our Belgian would be perfect for this project. It highlights the tropical fruit notes from the Brettanomyces while maintaining a subtle oak character from the barrels.”

Fans looking to be the first to take a walk on the wild side can look forward to two release parties that celebrate this collaboration. On Monday, Feb. 17 at 6 p.m. Crooked Stave’s taproom at The Source will release bottles for $10 with a four-bottle limit, a half hour later at 6:30 p.m. drafts will begin pouring. The following day (Tuesday, Feb.18) at 6 p.m. Upslope will host a release party at its Lee Hill tap room featuring $14 cans of the Wild Belgian Pale Ale (limit three) as well as additional barrel-aged styles and a food truck
About Upslope Brewing Company

Boulder-based Upslope Brewing Company is the creator of premium, filtered ale that is artfully crafted to compliment the outdoor lifestyle. Upslope beer is made with natural ingredients, including snowmelt. The five flagship beers include: Pale Ale, Craft Lager, India Pale Ale, Brown Ale and Imperial IPA. Additional installments are offered in a Limited Release Series. Upslope’s beer is packaged in aluminum cans because it is exceptionally portable, preserves the taste of the beer by keeping light out, and it uses fewer resources to pack and ship. In an ongoing effort to protect Colorado watershed, and the key ingredient in Upslope ale, one percent of Upslope’s Craft Lager revenue benefits the Colorado Trout Unlimited. Learn more about Upslope at www.upslopebrewing.com

Crooked Stave Artisan Beer Project is the culmination of “Founder and Brettanomyces Guru” Chad Yakobson’s open source Master’s research, The Brettanomyces Project. Crooked Stave’s progressive approach to brewing blends science and art through creativity and passion. The artistic creations, all of which use Brettanomyces yeast and mature in oak, result in beer of extraordinary complexity.