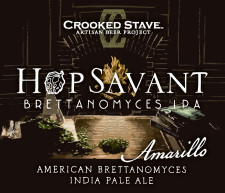 “HopSavant is a special beer for us and we are excited to be able to continue production again, thanks to our recent increase in fermentation capacity,” said Chad Yakobson, Crooked Stave Owner and Head Brewer. “The true character of our wild yeast Brettanomyces shines through in this beer and it’s fun to see how hops play off of the subtle and sometimes delicate nuances.”

HopSavant Amarillo (7.0% ABV) will be released at the Crooked Stave taproom on Wednesday, May 6 at 6:00 p.m. After being primary with Brettanomyces, HopSavant Amarillo received over three pounds per barrel of Amarillo hops, a varietal from the Yakima Valley in Washington known for it’s unique floral, citrusy orange marmalade notes.

Three weeks later, Crooked Stave will release HopSavant Citra (7.0% ABV) at its taproom on Wednesday, May 27. This batch of HopSavant Citra again received over three pounds per barrel of Citra hops in order to develop the dominant citrus aromas of grapefruit, lime, and passion fruit that the Citra hop is known for.

These two releases celebrate the addition of HopSavant to Crooked Stave’s lineup of core brands that includes Vieille Artisanal Saison, Surette Provision Saison, and St. Bretta Brettanomyces Citrus Wildbier. The brewery plans to release a new batch of each beer in this series each quarter.

During the release of HopSavant Amarillo on May 6, Crooked Stave will also release the May 2015 batch of Surette Provision Saison, one of the brewery’s quarterly-release series.

Crooked Stave Artisan Beer Project
Crooked Stave is the culmination of “Founder and Brettanomyces Guru” Chad Yakobson’s open source Master’s research, The Brettanomyces Project. Crooked Stave’s progressive approach to brewing blends science and art through creativity and passion. The artistic creations, all of which use Brettanomyces yeast and mature in oak, result in beers of extraordinary complexity.