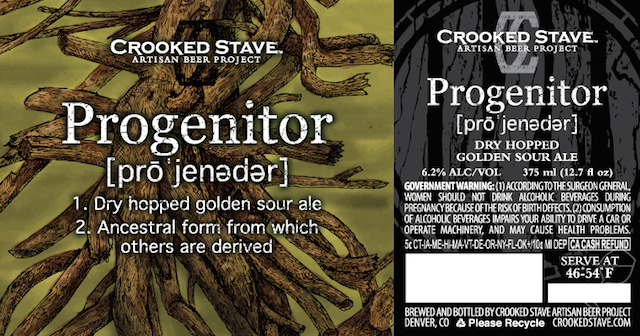 the ancestral form from which others are derived

Born from the idea that all beers were once sour, Progenitor is a beer unlike other modern sour beers – it is the primitive form of beer, but with an extreme take on dry hopping.

“We had fun when setting out to create Progenitor,” says Crooked Stave Owner and Director of Brewing, Chad Yakobson. “Having released a dry hopped sour or two previously, Progenitor was brewed specifically to sour with our unique mixed culture and then take a heavy hop dosing, creating a unique blend of sour funk and tropical citrus hop notes.”

Crooked Stave’s mission as a brewery is to push the boundaries of beer, using science and experimentation to produce beers of astounding complexity. Progenitor is an ode to this mission, using Brettanomyces yeast and Bacteria to produce a clean, dry, sour base, which puts the hops on full display and tropical aromatics at center stage.

“It is always our goal to take the techniques we have been working on in-house and apply them to new beers,” says Yakobson. “Progenitor is one of many small batch beers we plan to release every so often using new techniques that continue to push the boundaries of how we brew and make us continually re-think what sour beer is and what it can be.”

Crooked Stave is the culmination of “Founder and Brettanomyces Guru” Chad Yakobson’s open source Master’s research, The Brettanomyces Project. Crooked Stave’s progressive approach to brewing blends science and art through creativity and passion. The artistic creations, all of which use Brettanomyces yeast and mature in oak, result in beers of extraordinary complexity.