(Denver, CO) – Crooked Stave will hold a special limited release of Nightmare on Brett aged in Leopold Brothers Apple Whiskey Barrels at its taproom (3350 Brighton Blvd) on Wednesday, July 8th at 6:00 p.m. MST. The release will be taproom-only and bottles will not hit distribution. 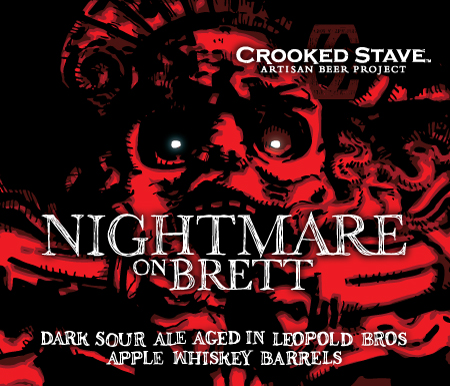 Crooked Stave has previously only conditioned one other beer in Leopold Brothers Apple Whiskey Barrels, its first release of Petite Sour Hibiscus and Cinnamon, which was exclusive to its Cellar Reserve members in 2013.

“Nightmare is brewed to stand up to extended barrel aging and intense flavors that come along with many months in oak,” said Chad Yakobson, Crooked Stave Owner / Head Brewer.  “The Apple Whiskey barrels are special in that they deliver a slight red apple sweetness to back up the robust cacao and sour notes. Leopold Brothers is one of the most talented distilleries in the country, and we are lucky to be able to showcase the great work they do in combination with our passion for barrel aging.”

On Wednesday, July 15, Crooked Stave will release a new batch of Colorado WildSage as well as the July 2015 batch of Vieille Artisanal Saison. Both releases will take place at the Crooked Stave taproom at 6:00 p.m. MST, with bottles hitting distribution shortly after. As part of the brewery’s core brands – which also includes Surette Provision Saison, St. Bretta Citrus Wildbier and HopSavant Brettanomyces IPA – this is the third batch of each of these beers in less than three months.

Crooked Stave is the culmination of “Founder and Brettanomyces Guru” Chad Yakobson’s open source Master’s research, The Brettanomyces Project. Crooked Stave’s progressive approach to brewing blends science and art through creativity and passion. The artistic creations, all of which use Brettanomyces yeast and mature in oak, result in beers of extraordinary complexity.