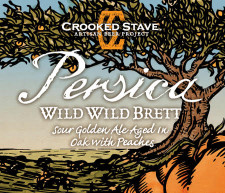 (Denver, CO) – Crooked Stave Artisan Beer Project has some exciting news for 2016 and it starts with the announcement that the Barrel Cellar will open back up for the release of Persica, the breweries most sought after of beer releases. On Saturday April 16th starting at 10:00 a.m. MST Crooked Stave will open its doors to the Barrel Cellar at 1441 W. 46th Ave. Denver, CO. The brewery will be tapping numerous barrel-aged sour beers from years past and to make a day out of the release, the Brewery will also be producing a limited edition Persica glass to be used exclusively throughout the day.

Due to the limited nature of Persica, bottles will ONLY be available on Persica day with a bottle limit of SIX bottles. This beer WILL NOT see any local distribution, in Colorado, our taproom or elsewhere and will only be available first come first serve on Persica Day. The bottle release will start at 10:00 a.m. MST and continue till bottles run out.

Persica was the breweries first major hit release in 2011 and has been one of the breweries most sought after beers since its release. Aged in oak barrels for months with copious amounts of fresh Colorado peaches, Persica embraces a bright citrus golden sour beer with all the peach flavor and aroma that can only come from the use of freshly harvest local peaches.

“After all this time, we are floored to be able to open our doors back up to all our great friends and fans to show off our recently renovated brewery and release one of our favorite beers of all time,” said Chad Yakobson, Owner and Brewmaster of Crooked Stave.

After nearly a year and half of construction projects, Crooked Stave has finished the first phases of build out projects that encompasses nearly 16,000 sq. ft. The former Barrel Cellar now Brewery and Barrel Cellar space includes the 25hl brewhouse equipped with a Coolship and overhead wooden ceiling, an all new Fermentation Cellar, enlarged Foeder Cellar which will house up to 25 Foeders and the future packaging hall nestled next to an entire cellar full of barrels.

Join the brewery for the first celebration of Persica Day and the grand opening of the Brewery and Barrel Cellar space with a day of celebration.

About Crooked Stave Artisan Beer Project
Crooked Stave is the culmination of “Founder and Brettanomyces Guru” Chad Yakobson’s open source Master’s research, The Brettanomyces Project. Crooked Stave’s progressive approach to brewing blends science and art through creativity and passion. The artistic creations, all of which use Brettanomyces yeast and mature in oak, result in beers of extraordinary complexity.