Portland, OR – Portland breweries Widmer Brothers and Gigantic Brewing announced a new collaboration beer, Craftylicious, to celebrate Widmer Brothers’ 30th Anniversary. Craftylicious is a bright, partial kettle-soured beer that is tart, hoppy, citrusy, and made for the late summer months. 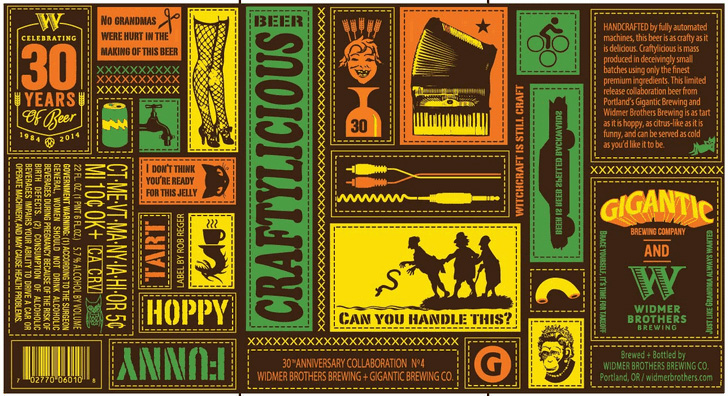 The brewers at Widmer Brothers teamed up with Gigantic’s Van Havig and Ben Love to have a little fun with the recent “craft vs. crafty” debate among some craft beer industry insiders, brewers, and beer geeks. The beer is Widmer Brothers and Gigantic’s take on the debate in beer form, and is meant to push the boundaries and challenge the perceptions of what is “craft,” what is “crafty,” and what is simply delicious beer.

Craftylicious is the fourth of six limited release collaboration beers with Oregon breweries to be released this year as part of a series that commemorates Widmer Brothers’ 30-year history. The 30th Anniversary Collaboration Series is a celebration of the Oregon brewing community and the unique camaraderie among craft brewers.

“I’ve known Ben and Van at Gigantic for a long time, and both of these guys have contributed to the Portland beer community in a big way,” said Ben Dobler, innovation brewer at Widmer Brothers Brewing. “They always manage to brew some really interesting, innovative beers, and we were excited to collaborate with them for the 30th Anniversary Collaboration Series. The idea for this beer came to us when we started talking about ‘craft vs. crafty.’ Given that Gigantic is a craft brewery by any standard, yet the guys at Gigantic proclaim that they’re ‘the world’s most crafty brewery,’ and Widmer Brothers has been labeled ‘crafty,” we thought we would have some fun with those definitions and labels with Craftylicious. ”

The next beer in the 30th Anniversary Collaboration Series will be brewed with Eugene’s Ninkasi Brewing Company and will be available in October.

About Craftylicious
Craftylicious is a limited release collaboration beer brewed by Portland, Oregon’s Widmer Brothers and Gigantic Brewing. The fourth release in a series of six beers brewed to celebrate Widmer Brothers’ 30th Anniversary in 2014, Craftylicious is a unique, bright, partial kettle-soured beer that’s tart, hoppy, citrusy, and perfect for late summer. Named for the “craft vs. crafty” debate among some brewers and beer geeks, Craftylicious pushes the boundaries and challenges perceptions with a beer that manages to be craft, crafty, and delicious all at the same time. Can you handle this? Prost!