(SAN DIEGO, CA) – Coronado Brewing Company is proud to announce a refreshed look for its Coastal Classics core beer lineup. As one of San Diego’s most established craft breweries, Coronado Brewing has gone through several branding iterations throughout its 23 years in business, with the latest version taking the brand in a bold, vibrant direction. “Coronado has evolved over the years, but we’ve never lost sight of our coastal roots,” says Brandon Richards, CEO, Coronado Brewing Company. “This brand refresh is the next step in our evolution to ‘stay coastal’ in a relaxed and not-so-literal way,” says Richards. 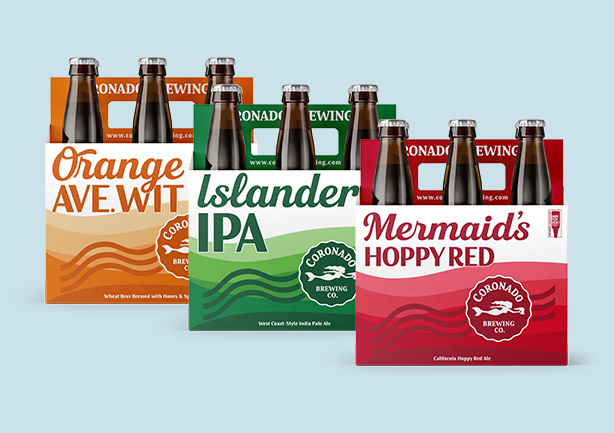 As a craft brewery with roots on Coronado Island, the company’s branding has always drawn inspiration from the coast. Over the years, the branding has evolved from muted, darker colors to the current light blue packaging that the company rebranded to in late 2014. The new direction takes the packaging to a clean white background with bold, banded color waves differentiating each of the Coastal Classics core brands, including Orange Ave. Wit, Mermaid’s Red, and Islander IPA. “We wanted the refresh to pop off the shelf,” says Richards. “The new look is very clean and really gives prominence to both the brand and beer style, allowing for consumers to quickly identify our beers on a crowded shelf.”

The brand refresh was done in-house, led by Kyle Chapman, son of co-founder Ron Chapman. The Coastal Classics refresh complements the fresh direction the company took with its New Wave series of 16oz canned beers, including Weekend Vibes IPA, Never Better Double IPA, and Leisure Lagoon Hazy Pale Ale. “We are anchoring our portfolio with clean white backgrounds and bold use of color,” says Richards. “Our 16 oz cans are resonating with the primary beer drinking consumers and we wanted to capitalize on that momentum by breathing new life into our classic beers.”

In 1996, when craft beer was still a foreign term and San Diego County was home to only a handful of breweries, the Chapman brothers Ron and Rick opened a brewpub in their hometown of Coronado. Today CBC stays true to its San Diego roots, brewing abundantly hoppy West Coast-style ales, which are available today in 14 US states and 12 countries. In addition to the long-established pub in Coronado, the company opened a tasting room inside its San Diego production facility in 2013, and a tasting room and restaurant in Imperial Beach, California in 2014. Coronado Brewing Company was honored in 2014 with one of the brewing industry’s most prestigious awards—World Beer Cup Champion Brewery and Brewmaster for a Mid-Size Brewing Company.