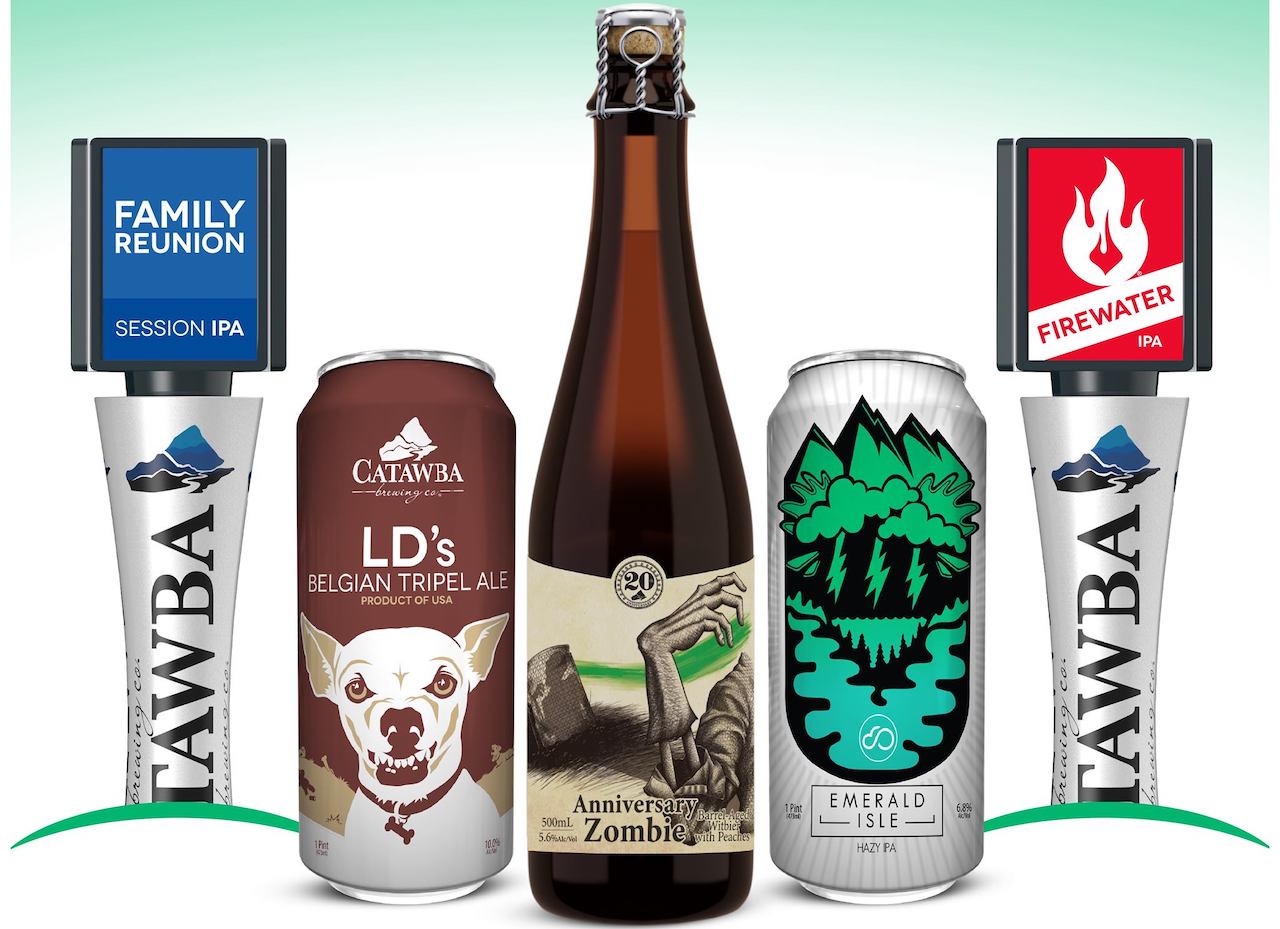 A Throwback to Catawba’s Roots

Having debuted in 2001, Firewater IPA (6.0% ABV) helped lead the march toward hop-forward beers in the early years of the Western N.C. craft beer scene. It quickly found a following, becoming Catawba’s original flagship beer, and later was included in the brewery’s first lineup of canned beers in 2012. Firewater will be pouring in Catawba tasting rooms for the first time in over two years.

Description: This American reinterpretation of the historic English-style IPA is superbly balanced and drinkable. A blend of British and American hop varieties lends complexity with floral, earthy undertones and a touch of citrus. Meanwhile, an equally sturdy array of barley and wheat provides a malty backbone — and feelings of nostalgia for IPAs of decades past.

The Catawba owners decided the 20th anniversary would be the perfect opportunity to gather an all-star team from Catawba past and present – their extended “family” of former employees, partners, and friends. Over the course of one unforgettable day, stories were told, laughs were shared, and Family Reunion Session IPA (5.1% ABV), a unique collaboration beer, was conceived.

Description: This IPA was brewed with a blend of five hop varieties: Simcoe, Cascade, Zythos, Mosaic, and Pacific Jade. An unexpected specialty ingredient appears in the grain bill — hammer-milled corn malt from Riverbend Malt House in Asheville. The result is a lightly sweet, yet generously hopped session beer.

Description: This barrel-aged wheat ale is a blend of White Zombie Witbier vintages fermented with brettanomyces, aged for an average of 24 months, and conditioned on South Carolina peaches. Stored in second-use oak barrels previously filled with Kentucky bourbon, the Anniversary Zombie offers a mélange of bright sour fruit flavors that intermingle with notes of peach cobbler, farmhouse funk, oak, and vanilla.

In Belgium, strong golden ales are traditionally named after forces of evil. So, it was only fitting for this beer to share initials with the meanest little guy in the Catawba Family: the infamous LD, a.k.a. Long Dawg, a.k.a. Little Devil. Like LD himself, LD’s Belgian Tripel(10.0% ABV) is irresistibly “complex.”

Description: This abbey-style strong ale is innocently yellow in color, deceptively light in body, and bursting with fruity yeast esters and spicy phenols – and a hint of warming alcohol. It was fermented with abbey ale yeast and features an addition of Belgian candi sugar. Flavor descriptors include apple, pear, lemon, banana, clove, peppery spice, and noble hop earthiness – all combining for a culinary-quality complexity.

Located on North Carolina’s Crystal Coast, Emerald Isle has seen more than its share of historic weather events and shipwrecks, where its notoriously rough seas have been dubbed the Graveyard of the Atlantic. A worthy addition to the Cloud Cover Series, Emerald Isle IPA (7.1% ABV) was brewed in celebration of Catawba’s emerald anniversary as a nod to what the brewery sees as a lasting, growing trend: juicy, fruit-forward, NE-style IPAs.

The emerald-anniversary excitement will kick off on July 15 with a “Find Green, Get Green” promotion in Asheville, Charlotte, and Morganton – totaling $1,000 in gift card giveaways. On each day (July 15-19) leading up to the anniversary bash, all tasting rooms will have one pint glass with a band around it, an emerald green color in honor of the 20th anniversary. The glass will be randomly hidden in the day’s serving glassware; the lucky person to be served the emerald glass “gets green”—a special emerald-colored $20 gift card valid for anything at the Catawba tasting room. The guest who is served the emerald glass during the July 20 anniversary parties at Asheville-South Slope, Charlotte, and Morganton willreceive a $200 gift card.

From onsite T-shirt printing and pop-up markets to bands and bites to anniversary excitement and giveaways in between, the four simultaneous parties will spotlight the uniqueness of each tasting room’s culture and community. Details may be found via these Facebook event links: Asheville – South Slope; Asheville – Biltmore Village; Charlotte and Morganton.

Catawba Brewing Co. has been an industry leader in Western North Carolina’s craft beer scene for two decades. The company was founded in 1999 by WNC natives, the Pyatt family, who were inspired by their weekend homebrew hobby. From humble beginnings, the business has grown exponentially to become a major craft beer supplier across five states. Catawba now operates breweries and tasting rooms in three NC cities – Morganton, Asheville, and Charlotte – embracing a hybrid wholesale/retail strategy. With the 2018 acquisition of Palmetto Brewing Co. in Charleston, SC, the Pyatt family hobby has spawned one of the Southeast’s largest and most diverse craft brewing entities. Learn more at www.catawbabrewing.com