(SAN DIEGO, CA) – Coronado Brewing Company is proud to bring back its Art Series for 2020. The company first debuted its Art Series in 2018, and the series has since evolved to now feature fan-submitted art on each of its cans. Coronado will release three Art Series beers in 2020, kicking off the series with Tropical Darkroom IPA. The winning photo was submitted by San Diego-based photographer Derek Delacroix; Derek exclusively shoots palm trees in black and white, and for each print he sells, he donates 50% of proceeds to the Surfrider Foundation. His Instagram handle is @tropicaldarkroom, and that was the inspiration behind the beer’s name—Tropical Darkroom Sour IPA. 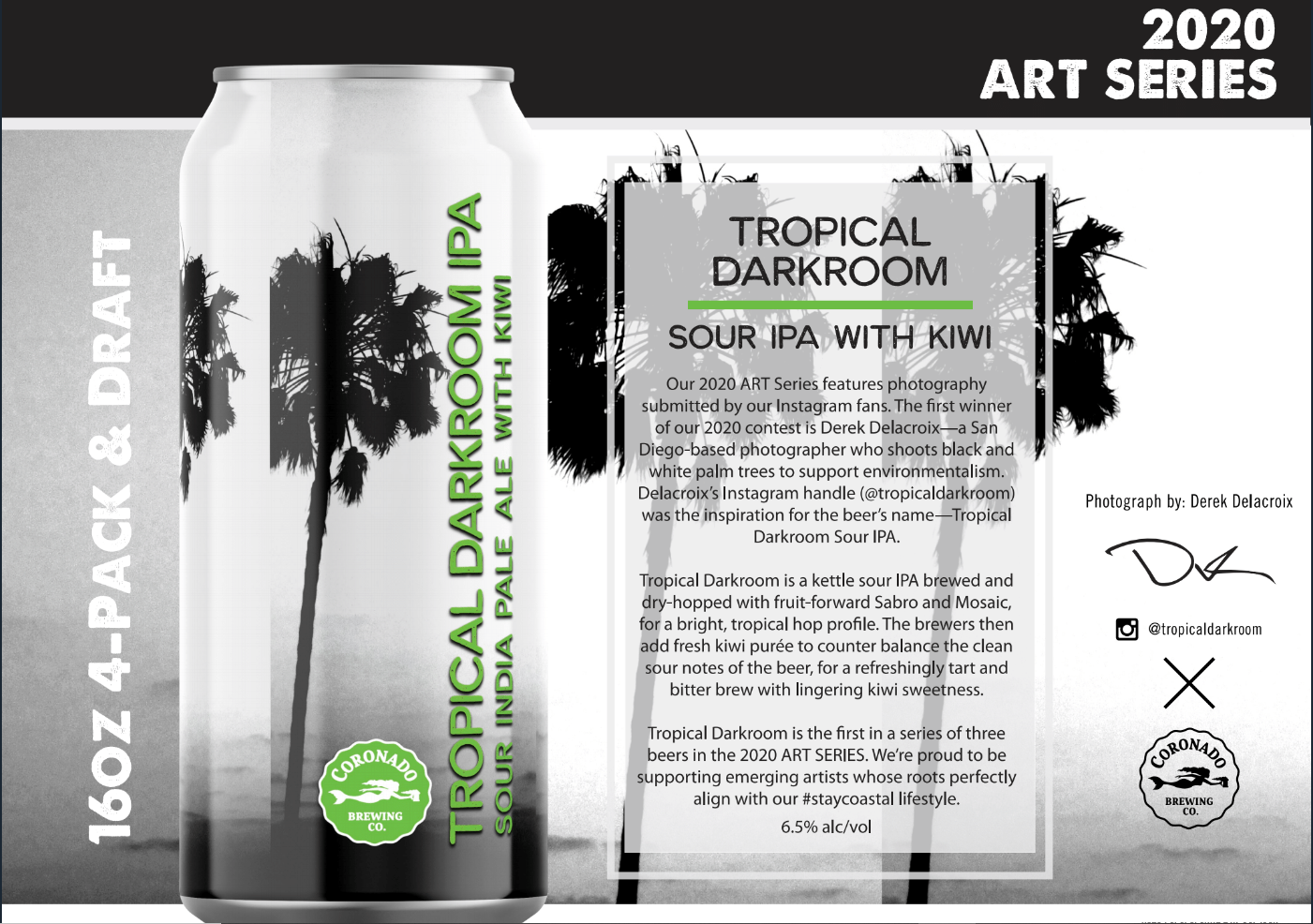 Tropical Darkroom is a kettle sour IPA brewed and dry-hopped with fruit-forward Sabro and Mosaic hops, for a bright, tropical hop profile. The brewers then added fresh kiwi puree to counterbalance the clean sour notes of the beer, for a refreshingly tart and bitter brew, with lingering kiwi sweetness. “We used a boatload of kiwi in the beer—almost 13 pounds per barrel,” says Mark Theisen, Head Brewer, Coronado Brewing Company. “The Mosaic and Sabro dry-hop combo gives the beer a really nice tropical, piña colada-like quality that goes really well with the kiwi. The beer finishes tart, but not super sour. We really wanted to find the perfect balance between a kettle sour and an IPA, and I think we achieved that with this beer.”

Tropical Darkroom IPA will debut at the company’s three locations on Friday, February 21, before being available for broader retail in March. Tropical Darkroom Sour IPA will be available on draft and in 16oz can 4-packs, while supplies last. Fans are encouraged to submit photos for future Art Series beers by following Coronado Brewing on Instagram and submitting photos using the hashtags #coronadoentry and #staycoastal. The company is currently searching for submissions for its second Art Series release, planned for June 2020. For more information about Tropical Darkroom Sour IPA, visit www.coronadobrewing.com. Stay Coastal. Cheers.

In 1996, when craft beer was still a foreign term and San Diego County was home to only a handful of breweries, the Chapman brothers Ron and Rick opened a brewpub in their hometown of Coronado. Today CBC stays true to its San Diego roots, brewing abundantly hoppy West Coast-style ales, which are available today in 14 US states and 12 countries. In addition to the long-established pub in Coronado, the company opened a tasting room inside its San Diego production facility in 2013, and a tasting room and restaurant in Imperial Beach, California in 2014. Coronado Brewing Company was honored in 2014 with one of the brewing industry’s most prestigious awards—World Beer Cup Champion Brewery and Brewmaster for a Mid-Size Brewing Company, and more recently, a bronze medal at the 2019 Great American Beer Festival for its Weekend Vibes IPA (American IPA category, 362 entries) and silver medal for its Freebooter Barleywine (Barley Wine-Style Ale category).