Comstock Park, MI – Located just off the beaten path in Comstock, MI, Perrin Brewing has earned a cult like following with beer drinkers that until now have been confined to the Grand Rapids area. Beginning next week, that beer is headed to Colorado. 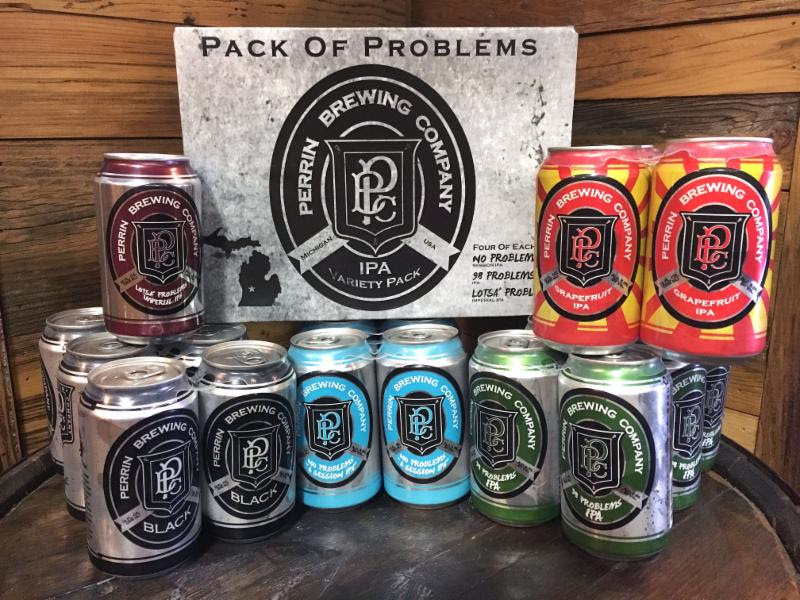 The burgeoning brewery’s buzz stems from head brewer, John Stewart’s, sought after and award winning creations initially only available at the Perrin brewpub. Perrin’s reputation within the strong Michigan craft beer scene led to a near ubiquitous draft launch across the state driving the brewery to nearly 15,000 barrels in just a few years. After a collaborative partnership with Oskar Blues Brewery expanded sought after, draft-only brews to cans last year as the distinction of Perrin’s creative and quality brews heightened.

Colorado craft beer fans will be the first out-of-state scene to get their hands on draft and cans of Perrin’s core beers: 98 Problems IPA, No Problems “A Session IPA”, and Perrin Black Ale. Perrin Brewing’s current seasonal beer, the hotly anticipated Grapefruit IPA, will also be available now followed by Blackberry IPA later this summer. These brews will be available at retail throughout Colorado as well as at Oskar Blues taprooms and fooderies.

“Through our collaboration with Oskar Blues Brewery we’ve felt a natural extension of our hometown passion for craft beer. We’ve been blown away with the Colorado craft beer scene and we’re excited to bring Perrin’s commitment to quality to the home of craft beer in-a-can.” stated Keith Klopcic, President of Perrin Brewing.

More about the Perrin Brewing Lineup

Perrin Black ABV 5.8% IBU 25: A light bodied, crisp and flavorful dark ale with hints of semi-sweet chocolate and soft nuances of fresh coffee. This beer is very counterintuitive in the way that it pours dark as night but tastes like a lighter beer encompassing a range of full flavors.

98 Problems IPA ABV 6.5% IBU 60: Our IPA accomplishes the nearly impossible feat of balancing a sweet malty backbone along with a blend of west coast hops, which creates a crisp bitterness and imparts massive floral and citrus aromas. This is how an IPA should taste!

Grapefruit IPA ABV 5% IBU 35: With aromas of citrus and tropical fruits, a delicate grapefruit tartness and a sweet malty backbone ending in a clean finish; This IPA is the first of its kind.

Perrin and Oskar Blues kicked off their relationship in 2014 with a collaboration lager brewed at Oskar Blues Brewery in Longmont, CO. That collaboration brew developed into a partnership aligning years of large-scale growth, expansion experience, and resources of Oskar Blues with the opportunities of Perrin’s strong local following to help both breweries strengthen their position in an era of increasing competition.

About Perrin Brewing Company
Founded in 2011 in Comstock Park, MI, Perrin Brewing Company has been propelled by the Michigan craft beer scene and achieved an impressive near-ubiquitous status on draft menus around West Michigan in just 2 years. In addition to the strength of their brewpub experience, Perrin taps are found at more than 700 locations in Michigan. Perrin Brewing began a partnership with Oskar Blues Brewery in 2015 which fueled a Colorado expansion in 2016.