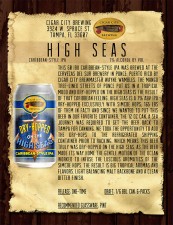 Tampa, FL – Cigar City Brewing is very proud to introduce you to our latest beer and the fantastic story that accompanies any worthwhile endeavor. The beer is called “Hopped on the High Seas.” We hope you enjoy it!

This 60 IBU Caribbean-inspired India Pale Ale started with a unique opportunity. Since our inception in 2009, we have had challenges meeting demand. A good problem to have but a problem nonetheless. So when the ownership group of Cervezas del Sur in Ponce, Puerto Rico approached us with the opportunity to brew beer in their recently shuttered brewery we knew we needed to explore the opportunity. Cervezas del Sur is a large brewery, much larger than our brewery in Tampa and the different equipment specs presented some technical challenges we needed to address. None of us had ever brewed on equipment of this size. Cervezas del Sur features a 240 barrel brewhouse and the smallest fermentor is a robust 960 barrels! A trip to to Ponce was in order to see exactly what we would be working with.

Arriving onsite at the brewery, the first thing we noticed was the row of fermentors, each one about eight times as large as the biggest fermentor we use in Tampa. The second thing we noticed was the abundance of mango trees growing on the property. After a quick snack of sun-ripened mango, we explored the brewery grounds noting the similar water profile to our home state, but also the large reverse osmosis system which would allow us to recreate any water profile in the world. We were intrigued. But what to brew? The German-built brewhouse at Cervezas del Sur could produce large batches of beer but the gravity-pushing brews we love to make at our original brewery in Tampa had never been attempted on this equipment. Could this brew house handle the CCB approach to beer making?

After much consideration, a concept of a 7% ABV IPA that prominently featured Simcoe hops developed, and the idea really kicked into another gear when we decided we wanted to package the beer in Tampa so that we could put it into cans. So we decided to dry-hop the beer in the shipping container on the way to its eventual home in Tampa, Florida. After formulating a plan of attack Wayne Wambles and production manager Madison Roane went back to Ponce to brew the inaugural batch. They pushed the brewhouse to the very edge of its limits and then a bit beyond, but at the end of the day they hit their gravity number and the wort was transferred for fermentation, marking the single largest batch of CCB wort ever created.

Once fermentation was complete, the beer was racked into a refrigerated, insulated and pressurized vessel to make its way via ship to Tampa where its creators eagerly awaited its arrival. Just prior to transfer to the shipping vessel, we added our dry-hops; a lot of them. 165 lbs of Simcoe hops in fact, making this beer truly dry-hopped on the high seas. The result was everything we had hoped for and then some. Luscious tropical fruit aromas and flavors are the highlight followed by a clean bitter finish and a light complimentary malt profile. While we are pleased with our experiment, the ultimate arbiters of our success will, as always, be our customers.