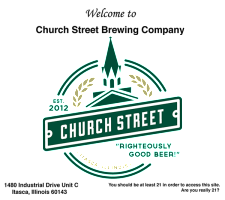 (Itasca, IL) – Church Street Brewing Company proudly announces its plans to distribute traditional styles of beer to Western Illinois through G&M Distributors of Galesburg. G&M is a family owned wholesale beverage distributor that began in 1946 and now represents over 30 suppliers and is the premier beer distributor in the Quad Cities, Galesburg, Macomb, Canton and Western Illinois. Church Street is confident in adding G&M to its distributor list and is excited to see another fourteen counties tapped into.

Church Street is expecting four new 30 BBL fermenters in November and has plans to add another four 30 BBL fermenters in the next year. The demand for Church Street’s classic European beers has greatly increased since its start in 2012 thanks to the support of its craft beer consumers. Expect to see new beers added to their list including a Polish style pilsner and an Extra Special Bitter.

Visit the taproom at Church Street Brewing in Itasca, IL Thursday through Sunday to celebrate righteously good beer with family and friends. Take a free tour of the production facility while you enjoy free beer smells! Also enjoy the brewery’s growing list of food trucks every Friday and Saturday to compliment your favorite Church Street Brew.

Church Street Brewing Company is a family business built on the dream of crafting the highest quality ales and lagers from around the world. The story began with a home brewing kit that made for a fun hobby, eventually leading to a production facility in Itasca, IL in February 2012. Brewmaster Joe Gregor’s love of classic European beers and owner Lisa Gregor’s passion for running a successful brewery has continued to inspire and grow the company with the help and dedication of all its employees. Please visit www.churchstreetbrew.com for any more information on Church Street Brewing Company.