(San Diego, CA) — After nearly 11 years spent helping to set the pace of Southern California’s craft beer movement at the helm of Green Flash Brewing Co., Brewmaster Chuck Silva has resigned from the San Diego, Ca.-based operation. Effective immediately, he will be funneling his energies into the establishment of his very own craft brewing operation at a yet-to-be-determined location in California’s San Luis Obispo County. 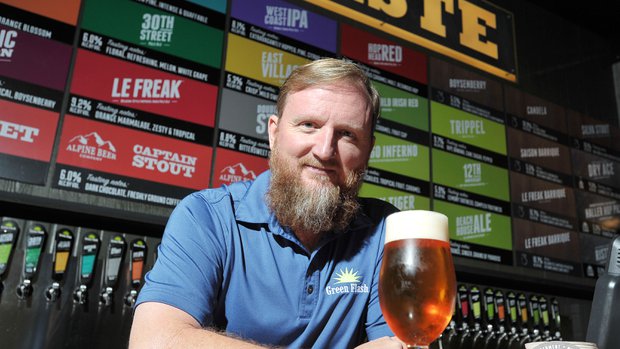 “Words cannot express my deep level of appreciation for the opportunities that Green Flash Founders Mike and Lisa Hinkley have provided me over the past decade-plus,” says Silva. “Together, we pooled our shared passion and determination to accomplish great things and introduce drinkers across the country to innovative, largely hop-forward beers that I was proud to help craft along with Green Flash’s passionate brewing staff. I will miss them all, but feel now is the time to focus on this next chapter.”

Adding to Silva’s enthusiasm is the chance to build his brewing company in the region where he grew up. The brewmaster hails from the Central Coast, and many of his longtime friends and family still live there. Silva is particularly excited about brewing up a business working side-by-side with the newest family member, wife Mary Jo.

When Silva joined Green Flash in 2004, the employee base totaled less than a dozen and the business was struggling to find an identity and market share in San Diego’s rapidly growing brewing industry. Thanks in large part to poignant beers tackling a wide range of styles—from hoppy beers to Belgian-inspired ales to barrel-aged sours and stouts, and more—Green Flash evolved into one of the nation’s premier brewing operations, currently employing more than 200 with nationwide and international distribution, and plans to open a second full-scale brewery in Virginia Beach, Va. in 2016.

“It’s been so fulfilling to play such a major role in the accomplishment of so many goals at Green Flash. Together, we’ve come further and grown larger than I could have ever foreseen. I couldn’t have done it alone and I thank every member of the craft community that helped me along the way,” says Silva. “But it’s always been my dream and personal long-term goal to brew on my own terms. Now is the time to go for it and I’m looking forward to working on smaller projects.”

ABOUT CHUCK SILVA: As the former Brewmaster and VP of Brewing Operations at Green Flash Brewing Co., Chuck Silva became well known for his award-winning, flavor-forward beer creations. He began his brewing career in San Diego after attending the American Brewers Guild and subsequent Craft Brewers Apprenticeship. Silva started as the Brewmaster for Green Flash Brewing Company in 2004 with an immediate focus on recipe formulation and development. He led Green Flash Brewing through two expansions in 2007 and 2009. In the fall of 2010, he led the brewery through a 44,000-square-foot build-out and moved brewing operations to a new, much larger San Diego facility, upping production to 45,000 barrels per year by the end of 2011. In 2015, Chuck led the brewery’s expansion in San Diego to a separate space in North San Diego County dedicated to housing all of the brand’s rare and barrel aged beers under the name Cellar 3. He was also integral to the planning of the company’s second brewing facility in Virginia Beach, Va.