(Escondido, CA) – IN A GALAXY NOT TOO FAR AWAY (A time not too long ago) – The seemingly sinister Stone Enjoy By 05.04.16 Black IPA by Stone Brewing has risen from sources of dark malted barley. Brewed specifically NOT to last, this immensely hopped black IPA refuses to rest until it makes the Kessel Run in less than 12 parsecs to hopheads in 22-ounce bottles and on draft at select retailers nationwide. 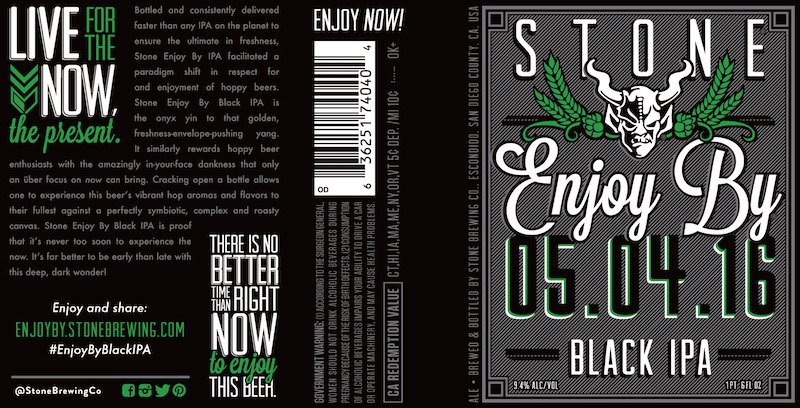 With the balanced support of pleasingly smooth malts, Vic Secret, Ella and (of course!) Galaxy lead the massive hop addition in this predominately Oz system hop profile. When combined and added, the hops produce nuances of dankness and tropical fruit qualities that are evident in the aroma, with a taste that is distinctively hoppy. This devastatingly dark force is out to restore freshness and appreciation to the black IPA subsect in cantinas and lairs across select parts of the known universe.

“Keeping in mind the words of an immensely wise philosopher—‘Do. Or do not. There is no try’—we created a recipe that featured the exact traits we wanted our fans to experience from a black IPA,” said Stone Brewmaster Mitch Steele. “The recipe we landed on really showcases the aromas and flavors of Australian hop varietals, which are balanced beautifully with the delicate back notes of roast and dark malts.”

A groundbreaking mission, the Stone Enjoy By IPA series facilitated a paradigm shift in how Stone and its distribution partners work together to deliver the most devastatingly fresh IPAs on the planet to craft beer enthusiasts. Just as on its light-side counterpart, the “Enjoy By” date sends an overt message to its fresh-seeking fans on the bottle, indicating precisely the date by which the black IPA must be consumed to enjoy maximum freshness. In the unlikely event that any Stone Enjoy By 05.04.16 Black IPA remains on the shelves on May 5, the Revenge of the Fifth will strike in the form of empty shelves and draft lines.

For those social media savvy imbibers, Stone has a dedicated Web page, enjoyby.stonebrewing.com, that captures fans’ experiences with the Stone Enjoy By IPA series and all of its variations. Fans are encouraged to share posts using the hashtag #EnjoyBy on Twitter and Instagram or by checking in on Untappd. Tweets, photos and check-ins are then posted on the page’s live social feed.

About Stone Brewing
Founded by Greg Koch and Steve Wagner in 1996, San Diego-based Stone Brewing is the 9th largest craft brewer in the United States. Stone has been listed on the Inc. 500 | 5000 Fastest Growing Private Companies list 11 times, and has been called the “All-time Top Brewery on Planet Earth” by BeerAdvocate magazine twice. The multifaceted company will be the first American craft brewer to independently build, own and operate a brewery in Europe, and is also building a production brewery and destination restaurant in Richmond, Virginia. Brewing at both locations will be underway in summer 2016. Known for its bold, flavorful and largely hop-centric beers, Stone has earned a reputation for brewing outstanding, unique beers while maintaining an unwavering commitment to sustainability, business ethics, philanthropy and the art of brewing. For more information on Stone Brewing, please visit stonebrewing.com or the company’s social media sites: Facebook, Google+, Instagram, Pinterest, Twitter and The Stone Blog.