(Morganton, NC) – The legendary “PB&J sandwich in a glass,” Peanut Butter Jelly Time (5.7 percent ABV), makes its annual return to the Catawba menu on March 1 with a weekend release party. The beer starts as a light brown ale with a touch of wheat in its malt bill, providing the bready base for the star ingredients – real raspberry puree and whole roasted North Carolina peanuts. Continuing a new tradition started last year, the release party for Peanut Butter Jelly Time will include three specialty variations of the beer in addition to the original Raspberry: Strawberry-Rhubarb, Blackberry, and the debut of Black Currant. 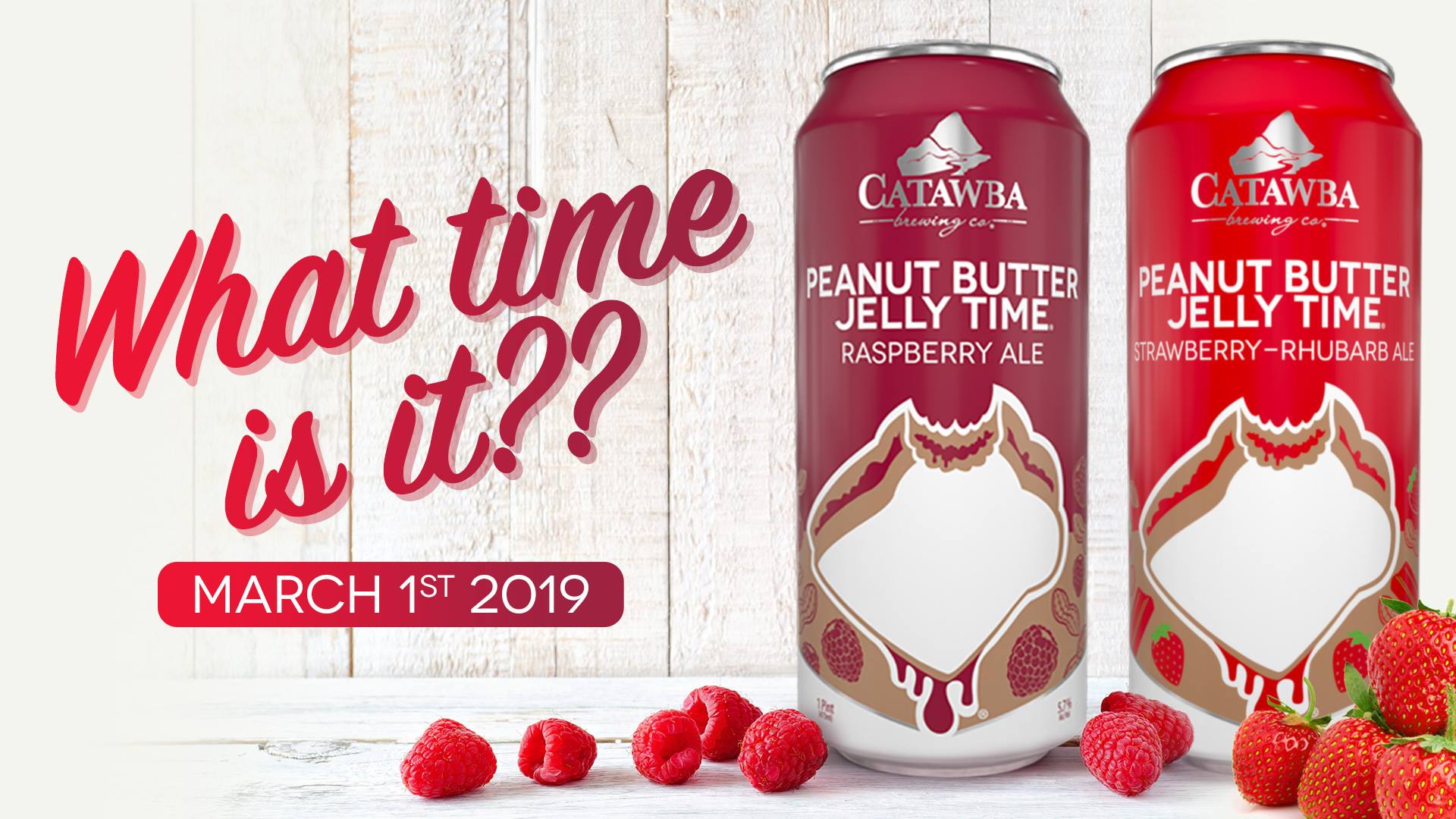 Availability
Catawba’s most popular Specialty Series beer since 2012, PB&J will be at all four Catawba tasting rooms and the Palmetto Brewing tasting room in Charleston. The three small batch beers were brewed in Catawba’s Asheville and Charlotte brewhouses and will be sold exclusively in their tasting rooms. A special PB&J flight will be offered while supplies last.

PBJ will also be sold in 4-pack 16oz cans at all tasting rooms and in five-state distribution. Plus, this year marks the first appearance of a spin-off flavor in cans, as PB&J Strawberry-Rhubarb will be available in extremely limited 4-packs.

Catawba Mardi Gras & Small Batch Beer Release
Catawba will tap a King Cake Pastry Stout (6.7 percent ABV) on Feb. 28, which will be available at all four locations. The recipe was designed as an homage to the famous New Orleans dessert associated with the Mardi Gras season. This decadent, silky-sweet milk stout reinterprets the king cake in liquid form with additions of vanilla, cinnamon, and lactose sugar. The beer will be featured at Catawba’s Mardi Gras party at their Asheville South Slope tasting room, starting at 6 p.m. on the release day. The free event includes live music by Zydeco Ya Ya and other New Orleans-themed festivities.[TS1]

Catawba Brewing Co. has been an industry leader in Western North Carolina’s craft beer scene for two decades. The company was founded in 1999 by WNC natives, the Pyatt family, who were inspired by their weekend homebrew hobby. From humble beginnings, the business has grown exponentially to become a major craft beer supplier across five states. Catawba now operates breweries and tasting rooms in three NC cities – Morganton, Asheville, and Charlotte – embracing a hybrid wholesale/retail strategy. With the 2018 acquisition of Palmetto Brewing Co. in Charleston, SC, the Pyatt family hobby has spawned one of the Southeast’s largest and most diverse craft brewing entities. Learn more at www.catawbabrewing.com