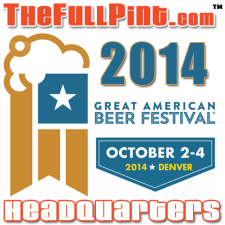 Boulder, CO – The 2014 Great American Beer Festival(GABF) competition awarded 268 medals to some of the best commercial breweries in the United States, plus three GABF Pro-Am medals. Presented by the Brewers Association, GABF is the largest commercial beer competition in the world and a symbol of brewing excellence. In its 28th year, the 2014 competition surpassed all previous participation records.

To accommodate growth, this year’s GABF competition saw its biggest panel of judges ever, with 222 beer experts from 10 countries evaluating 5,507 commercial entries, plus 89 Pro-Am entries, with assistance from some 150 competition volunteers.

Award-winning brewers received prestigious gold, silver and bronze medals in 90 beer categories covering 145 different beer styles (encompassing subcategories), establishing the best examples of each style in the U.S. Winners were chosen from 5,507 competition entries (16 percent more than in 2013) from 1,309 breweries, hailing from 50 states plus Washington, D.C.

2014 Brewery and Brewer of the Year Awards

Mid-Size Brewpub of the Year

The top five entered categories were:

The winners in the most-entered (that is, the most competitive) categories were:

The 2014 GABF competition featured three new categories: Belgian-Style Fruit Beer, with 41 entries; Historical Beer, with 12 entries; and Kuyt Beer, which had no entries.

There were two categories in which one of the three possible medals was not awarded:

Gold, silver and bronze medals were also awarded in the GABF Pro-Am competition, which pairs amateur brewers with professional brewers, who scale up the award-winning homebrew recipes. The medal winners, including the winning professional brewers and American Homebrewers Association (AHA) member homebrewers are:

Additional GABF sponsors are recognized on the festival website.

The Brewers Association is the not-for-profit trade association dedicated to small and independent American brewers, their beers and the community of brewing enthusiasts. The Brewers Association (BA) represents more than 75 percent of the brewing industry, and its members make more than 99 percent of the beer brewed in the U.S. The BA organizes events including the World Beer Cup®, Great American Beer Festival®, Craft Brewers Conference & BrewExpo America®, SAVOR℠: An American Craft Beer & Food Experience and American Craft Beer Week®. The BA publishes The New Brewer magazine and its Brewers Publications division is the largest publisher of contemporary and relevant brewing literature for today’s craft brewers and homebrewers.