(Cape May, NJ) – Cape May Brewing Company is celebrating eight years of quality brews Crafted on the Cape with two anniversary parties on June 28th: the first at their Tasting Room at 1288 Hornet Road in the Cape May Airport and the second at Cabanas Beach Bar and Grill at 429 Beach Avenue in beautiful downtown Cape May. 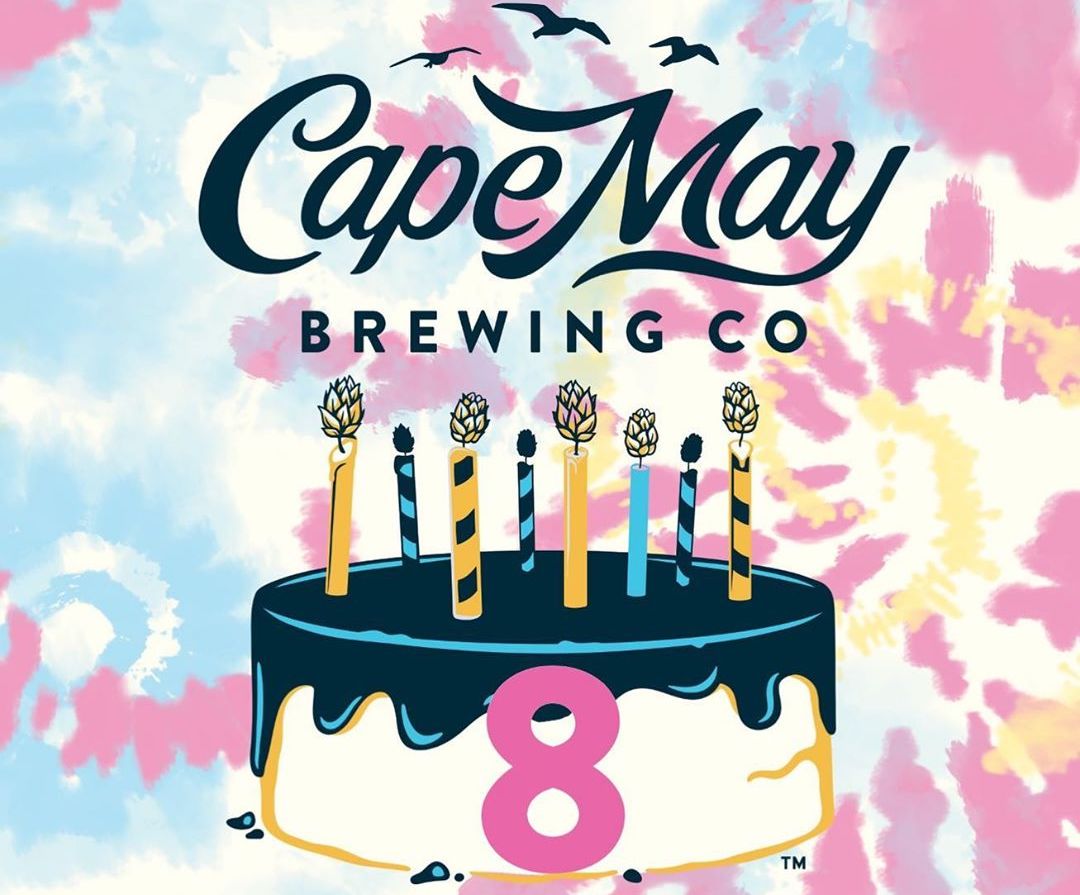 “We can’t believe it’s been eight years,” says CEO and co-owner Ryan Krill. “When we brewed our first batch of Cape May IPA, kegged it up, and sold it to Cabanas, we had no idea that, eight years later, we’d be celebrating with nearly 90 employees and 25,000 square feet at the Cape May Airport. Those facts by themselves deserve a celebration.”

Beginning at 11am, Cape May Brewing Company will be releasing three canned beers.

The Shower, Sweet and Sour Cranberry Ale: Whenever we’ve had our beloved cranberry shandy The Bog on tap at the same time as our sour beer Tower 23, mixing equal parts of the two became a fan-favorite pour behind the bar. The sour and sweet combination is too delicious to pass up, and we’ve brought you The Shower: a perfect blend of two of our favorite brews.

And Tan Limes, Cape May Brewing Company’s Mexican-style Lager brewed with a touch of local Cape May Sea Salt and a hint of Persian lime juice, returns. Tan Limes was such a hit when it was released in May that CMBC is bringing it back for their eighth anniversary. Fresh and zesty, Tan Limes would be perfectly at home at your local cantina and is best paired with street tacos, brilliant sunshine, and close friends.

Fans will be able to sample a specialty, eighth-anniversary flight: Anniversary Ale 8, The Shower, Tan Limes, and Cape May Lager with a possible upgrade to include CMBC’s new lager wheat glass, also releasing that day.

In addition, each of CMBC’s co-founders has devised a one-off. CEO Ryan Krill has mixed up an Arnold Palmer Crush — an IPA with black tea and lemonade. COO Chris Henke dreamed up a pickle sour — a kettle soured wheat ale with pickle spices. And Vice President Robert Krill asked for Shower Slushies in a color-changing cup. These specialty brews will be tapped at 2pm.

At 11am, CMBC’s Birthday Cake cask will be tapped on the Beer Engine — Anniversary Ale 8 with lactose, vanilla, cotton candy, and brown sugar, and fans will have the chance to win a special prize if they kick the cask. Since the traditional 8th-anniversary gift is pottery, one lucky fan will receive one of CMBC’s new earthenware mugs. This 16-ounce mug is made by hand by the good people at Sunset Hill Stoneware using carefully sourced clay, a beautiful glaze, and a special medallion based on Cape May Brewing Company’s former logo.

Each year, CMBC sponsors a team for BikeMS: City to Shore, raising money for Multiple Sclerosis research. Representatives from BikeMS will be on hand to collect donations, and attendees will have the chance to sign up for the ride at a 15% discount.

In addition, there will be door prizes and unique, Instagram-worthy photo backdrops to help capture your memories of CMBC’s birthday celebrations.

In addition, at Cabanas, revelers will be able to sample margaritas made with Cape May Brewing Company’s fan-favorite cranberry shandy, The Bog, from Cabanas staff, and DJ Byrd will be on site, spinning the hottest tracks.

For more information, including for tours and tastings, see www.capemaybrewery.com, or call (609) 849-9933.