(Cape May, NJ) — Cape May Brewing Company, the Jersey Shore’s premier local brewery, is pleased to announce a new iteration in their highly acclaimed Barrel Aged Series. Brothel Madam — a barrel-aged golden sour ale conditioned on raspberries and cranberries — releases from their Tasting Room at 1288 Hornet Road in the Cape May Airport on Saturday, May 27th. 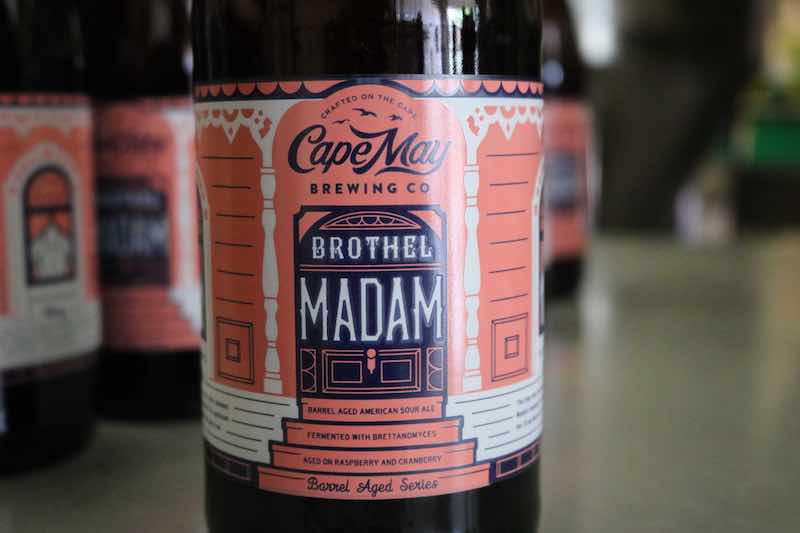 “Last year’s Barrel Aged Series was a huge success,” says CMBC president and co-founder Ryan Krill, “and this year should prove to be no different. While last year’s brews were nautically-themed, this year we’ve decided to focus on the numerous ghost stories that abound throughout Cape May.”

Cape May is well-known as haven for the spectral. No fewer than five books have been written about the ghosts of Cape May, the Mid-Atlantic Center for the Arts and Humanities runs seven ghost tours throughout the city, and Syfy’s Ghost Hunters did an episode in the town.

When searching for inspiration for the theme of this year’s Barrel Aged Series, Graphic Designer Courtney Rosenberg commiserated with Beertender Maddie Macauley for Cape May-inspired themes, eventually settling upon the phantasmal.

“These aren’t Casper the Friendly kind of ghosts,” Rosenberg says, “they’re ghosts or spirits that have a story at many of the locations people visit daily in Cape May.”

One of Cape May’s bed and breakfast gems, The Queen Victoria, has a building called the House of Royals, which housed a brothel and gaming parlour in the 1800s, where the most powerful men of Victorian America were among her clientele. Reportedly, visitors to the establishment have reported the ghostly apparition of the building’s former manager drifting aimlessly along her halls, searching out the errant customer, dreadfully behind on his payments to the house.

For this brew, Cape May Brewing Company has created a barrel-aged American sour ale, conditioned on raspberries and cranberries. After fermenting the base with Brett for several months in a stainless steel fermenter, the fruits were added before racking the brew into used oaken red wine barrels for about six months. Then, Brothel Madam has been bottle-conditioned for two weeks before release.

While this is CMBC’s first fruited sour, they’re not all that uncommon, with mango, peach, guava, watermelon, acai, kiwi, and apricot being some common fruits brewers tend to use. The base of Brothel Madam already had some notes of peach and apricot and some tartness from the Brett, so this recipe plays up that tartness and increases the fruitiness with some raspberry and cranberry.

“The base was good but simple, with some classic Brett esters, some notes of stone fruits, and just a touch of tart from the Brett as well,” says CMBC Director of Brewing Operations Jimmy Valm. “It was good, but needed a little je ne sais quoi, and we knew this was our beer to add fruit.”

The bottle design is meant to evoke thoughts of the haunted houses that abound throughout Cape May.

“Just think about walking down Decatur Street or Jackson Street in Cape May,” Rosenberg says. “The house colors, the gingerbread, the windows and so on.”

Like the first run of the Barrel Aged Series, the labels will all be variations on a theme.

“The colors will match the houses in Cape May, and there will be similarities between each bottle,” Rosenberg continues. “When you line them up, you will have a lineup of houses you might see on the streets of Cape May.”

Releasing Memorial Day Weekend, the brewers at CMBC think Brothel Madam is the perfect brew to begin the summer season.

“This fruity explosion is going to be great for sitting on the porch as the gentle summer breeze blows by,” Valm says.

Head Brewer Brian Hink agrees. “I dig it, and I think it’s the perfect beer to be coming out Memorial Day Weekend. It’ll be a great summer beer, one I really look forward to going back to again and again.”

Brothel Madam releases from Cape May Brewing Company’s Brewtique at 1288 Hornet Road in the Cape May Airport on Saturday, May 27th, at noon for $20.

For more information on Cape May Brewing Company, including for tours and tastings, see capemaybrewery.com or call (609) 849-9933.
###