(Cape May, NJ) — Cape May Brewing Company is thrilled to once again partner with an honored Cape May institution to brew a beer with a special connection with their Cape May roots. Releasing February 8th, Always Ready — a Northeast Pale Ale with Mosaic, Citra, Denali, Calypso, Ekuanot, and Zythos hops — is brewed in tribute to the United States Coast Guard. 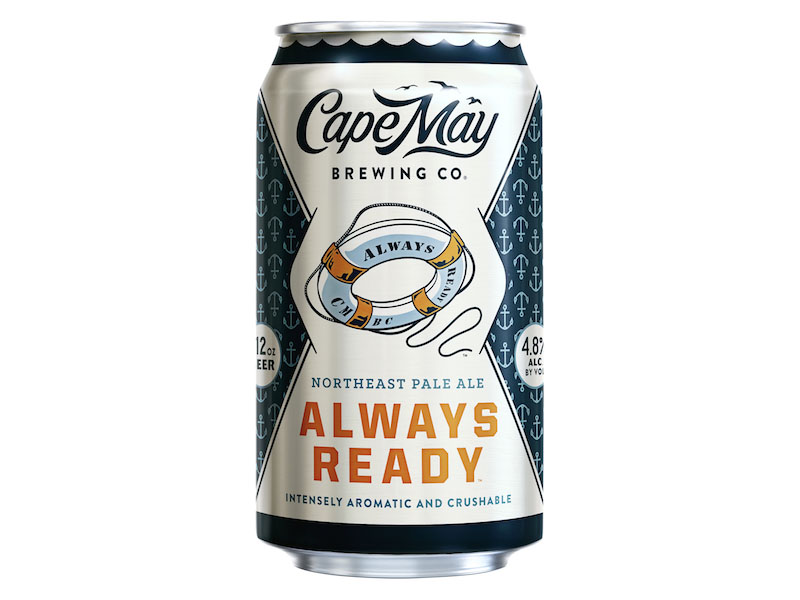 Home to the Coast Guard Training Center Cape May — the Coast Guard’s fifth-largest base and sole training center since 1982 — over 4,000 recruits spend their eight-week training period in Cape May each year. A proud Coast Guard Community, since 2015, Cape May County has shared this distinction with only 18 other cities and one other county.

“In Cape May, we love our Coasties, and it’s no different at Cape May Brewing Company,” says CEO and co-founder Ryan Krill. “For eight weeks each year, they call Cape May home and treat us with as much care and respect as they would their own hometown. We owe a debt of gratitude to each recruit who goes through the Training Center: not only do they work tirelessly to keep our shores safe, but their dedication to Cape May Brewing Company has been instrumental in our success. After their tour of duty, they return to their homes with our merchandise, our logo, and tales of some of the best beer they’ve ever had.

“We could think of no better way to thank them than with a beer in their honor.”

In Always Ready — the English translation of Semper Paratus, the Coast Guard’s motto — drinkers will find brilliant aromas of orange and tangerine zest combined with a hint of dankness. With a medium body thanks to the addition of wheat and oats in the grain bill, Always Ready is hopped heavily with Mosaic, Citra, Denali, Calypso, Ekuanot, and Zythos hops bringing an intense hop aroma paired with a firm bitterness.

“Members of Coast Guard Training Center Cape May are honored to be part of the Cape May community,” said Chief Warrant Officer Jake Cuomo, the personnel officer at the Training Center. “The recognition of our relationship by businesses in the area exemplify why we say that Cape May County is the Coast Guard’s hometown.”

Cape May Brewing Co. designed this beer with the Coast Guard’s motto — Semper Paratus or “Always Ready” — in mind.

“We really wanted a beer that could be your go-to brew for any occasion,” says Director of Brewing Operations Jimmy Valm. “But we also like to brew beers that we at CMBC enjoy drinking, which usually means ‘HOPS!’ It took a few tries, but in the end I think we really nailed it with a beer that anyone can enjoy.”

“The approachability is really on full display at first sip,” he says. “The aroma is intense, but it’s also intensely intriguing, and as soon as you try it you know you’re drinking something unique. The hopheads are going to love it, but the low bitterness, medium body, and enticing aroma really make this something for everyone.”

Cape May Brewing Company is celebrating the release of this distinctive brew with a release party on February 8th from 5-8pm. There, CMBC will debut their new Coast Guard discount — $1 off pints for active-duty and retired USCG members, year round.