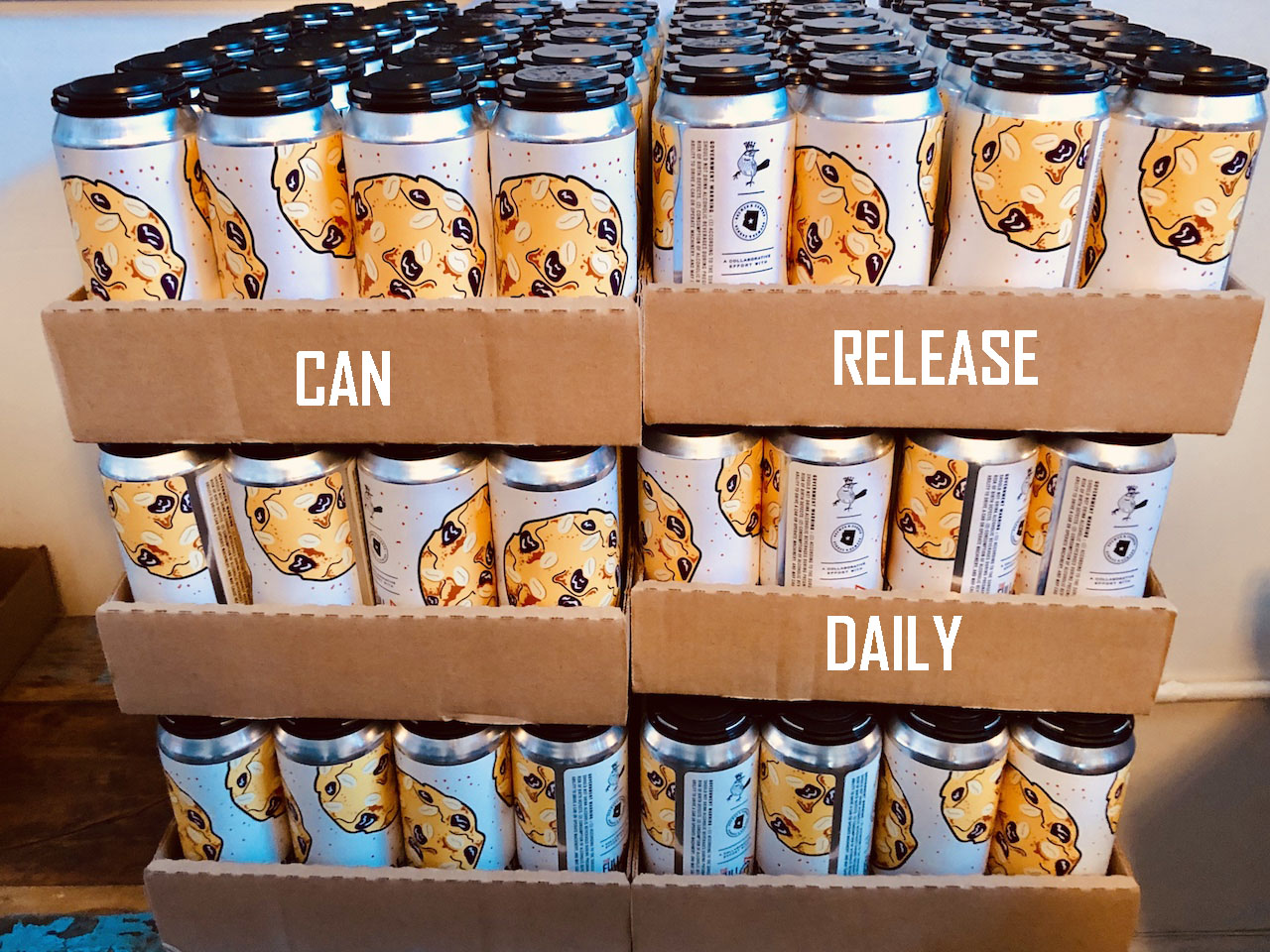 We are back with the latest edition of Can Release Daily. Every day, around the world, small breweries are offering some of the freshest, most innovative beers right out of their tasting rooms. With so many breweries releasing so many brightly labeled beers, it’s hard to keep track of it all. Because we love centralized info, we decided to bring you the latest releases in this post. Check out can releases from Evil Twin NYC, Great Notion, Wren House, Brouwerij West, Aslin Beer Co, Rockwell Beer Company, Double Nickel Brewing, WeldWerks, Moonraker, Burlington Beer and Austin Street Brewery.

Second can release for this Saturday, April 13 is our World Beer Cup Gold winner Double Stack! This is our OG Imperial Breakfast Stout fermented with an irresponsible amount of maple syrup and aged on whole bean Sumatra from our friends at Clutch Coffee. $22/4-pack. See you Saturday at 9am at NW! Photo cred: @stop_and_smell_the_hops

Roof Rat release tomorrow at 11! Limit 2x 4packs per person, $20/each. We’ll also have a Las Frescas on draft made with Guava + Pineapple. Tomorrow is shaping up to be a treat! Roof Rat details: We started with all local @sinaguamalt , blood orange and grapefruit purée then finished with milk sugar and a whole load of vanilla for a 8.1% Citrus Milkshake DIPA experience like no other. We’re confident you’ll love this one. #sinagua #dipa

Today, Friday, April 12th at 3PM we will be releasing Buongiorno Imperial Stout w/ Almond, Coffee, and Vanilla. This Biscotti Stout is the perfect addition to your morning coffee! ABV 15% $8/can Limit (8) Cans

Super Mega Dank 420 Kush Daddy Supreme is dropping Tomorrow at 4PM at the brewery.⁣ ⁣ We reworked the recipe this year, and brewed this dank and hazy IPA with a heartier amount of oats, flaked oats, and wheat. Mosaic, Azacca, and Citra elevate this brew to a higher plane—into the dank and juicy clouds of blueberry, mango, pineapple and tangerine. ⁣⁣⁣ ⁣⁣⁣ $17/4-pack, limit 1 case/person⁣⁣⁣⁣⁣⁣ ⁣⁣⁣ We’ll also be hosting a little get together here at the brewery on 4/20 with our friends @litoandtheshepherds playing a live set. Stay tuned for more info on the event. ⁣⁣⁣ ⁣⁣⁣⁣⁣⁣⁣⁣ #Supermegadank420kushdaddysupreme #420 #canreleas #hazyipa #njcraftbeer #phillybeerscene #craftbeerlover #beerme

We apologize for the late announcement, but the Craft Brewer’s Conference had us all over the place this week. Today we have 3 beers to announce, two returning and one brand new! All are available starting today on draft and in cans to-go!⠀ ⠀ FOOD TRUCKS⠀ Fri: Hop and Hoe⠀ Sat: The Trump About⠀ ⠀ 🍦🍨NEAPOLITAN ICE CREAM SOUR🍨🍦⠀ It’s back! The response to this fun soda-shoppe inspired sour ale was so overwhelmingly positive that we decided to bring it back ASAP. Brewed with milk sugar, milk chocolate, strawberry puree and vanilla. 4.7% ABV⠀ ⠀ $14 per 4-pack, limit 1 case per person.⠀ ⠀ ☕️🍁COFFEE MAPLE ACHROMATIC🍁☕️⠀ We technically released this one on Monday but wanted to make sure it got a greater feature. Chewy and creamy with tons of chocolate malt, huge additions of maple syrup, and enough coffee to balance, Coffee Maple Achromatic is our quintessential breakfast beer. We boil for more than 6 hours to achieve the unbelievably rich, chewy, thick mouthfeel of the base beer. We take the decadence to the next level with multiple maple syrup additions throughout the process, which are a perfect complement to the huge addition of barrel-aged Peruvian coffee from our friends at Zoe’s Cafe, which was aged for several weeks in a spent Medianoche bourbon barrel before roasting. We are extremely happy with how this batch turned out and we think you will be too! 10.2% ABV⠀ ⠀ $11 per 19.2oz stovepipe can, limit a half-case per person.⠀ ⠀ 🌠CARDBOARD METEORITE🌠⠀ 8.3% hazy double IPA brewed with Mosaic, Citra and HBC 344 + HBC 520 experimental hops. Continuing our experimentation with new hop varieties, we think this one is really going to block your socks off. Notes are as varied as coconut, papaya, lemon zest, watermelon Jolly Ranchers, grapefruit, passion fruit and vanilla!⠀ ⠀ $16 per 4-pack, limit 1 case per person!

Citra Double Crush Cans on this beautiful Friday. It’s a great day to sit on the patio and enjoy a pint and some food from Buck & Sadie’s. Cans also available of Amelia, Tangerine Sky. Limited cases of Papillon, Citra Mango Milkshake and Head Change. #craftbeer #moonrakerbrewing

Can Release 12pm Friday April 12th FOURTH COLOUR Double IPA with Milk Sugar – 8% Hopped with Simcoe, Waimea, Wakatu, & Mosaic. Hop flavors and aromas of Orangina and Fruit Punch. We added Milk Sugar for a smooth, creamy body, allowing the hop flavors to linger. This is not a milkshake ipa. It’s a smooth af double ipa. A couple weeks ago our friends from @finbackbrewery visited Vermont and collaborated on two brews with us on our 30 bbl brewhouse. Releasing this Friday April 12th is the first of the two collaborations.

Every year we brew a double IPA for our anniversary to celebrate the passing of another year and to load a bunch of our favorite hops into one beer. This year is no exception. The 5th Year Anniversary DIPA features Azacca, Topaz, Nelson Sauvin, Simcoe and Vic Secret. Along side that we also brewed the 4th year beer again with last years hop bill of Citra, Simcoe, Enigma, and Galaxy. Both will be available Saturday at Noon, both locations. Limit will be 1 case per person, per beer. We’ll also have @mr.tuna_maine in the house at Fox St. Lastly, please join us on Sunday as well for the Anniversary party at Fox St. @farmtocoastmobilekitchen will have a special anniversary menu and we’ll have *free* @deardairy.icecream! #everysipconsidered