(Austin, TX / Placentia, CA) – Jester King Craft Brewery is very excited to announce Imperial Cabinet — our collaboration with Bruery Terreux! Imperial Cabinet is a barrel-fermented farmhouse ale inspired by a New Orleans classic cocktail invented in the 1880s called the Ramos Gin Fizz. As is often the case with our collaborative projects, it was fermented with a blend of microorganisms from Bruery Terreux and Jester King, so as to explore the the interesting and unpredictable directions that mixed culture fermentation can take a beer. 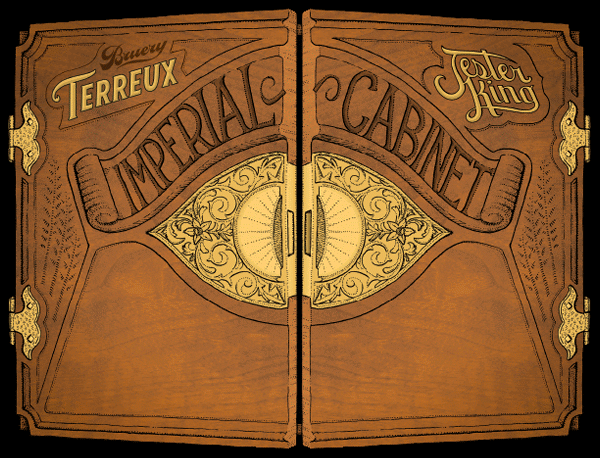 Designing the beer around the recipe for the classic cocktail was a lot of fun! The grist consisted of a high percentage of unmalted wheat and rolled oats to mimic the creaminess of the drink. Higher alcohol (8-9% abv) was another starting point, and gin botanicals (rosemary, lavender, juniper, and cubeb pepper) were added to the boil. Dried orange blossoms were also added to the boil, as the cocktail recipe calls for orange blossom water. A roughly year-long, mixed culture fermentation in oak barrels with yeast and bacteria from both Bruery Terreux and Jester King, helped promote tartness and acidity in the beer. In the cocktail, the tartness comes from lemon and lime juice. During the final few weeks in oak, we added orange peel, lemon zest, lime zest, and vanilla beans. The citrus peel and zest further plays upon the characteristics of gin. There’s some controversy about whether the original cocktail recipe called for vanilla, but we thought it was a tasty addition.

We here at Jester King are thrilled with the way Imperial Cabinet came out. We’d like very much for beer drinkers in Texas to be able to taste it too! Unfortunately, the Texas Alcoholic Beverage Commission code makes it very difficult for small, out of state breweries to sell their beer in our home state. Texas charges brewers about $7K every twenty-four months to sell both “beer” and “ale”. The result of these massive licensing fees is that many small, artisanal brewers bypass Texas for other more friendly markets. Afterall, why would a small brewer pay $7K to sell its beer in Texas, when it can just sell it in another state? The way the system works, it tends to be the larger brewers seeking to expand their national footprint that end up coming to Texas. When we sent beer earlier this year to Oregon for the Craft Brewers Conference, it cost us $10. If an Oregon brewer wants to send its beer to Texas, it costs $7K. This isn’t right, is anti-small business, needs to change, and is why Imperial Cabinet will not be sold in Texas.

Regardless of our frustrations over the highly-regulatory beer laws in Texas that routinely hurt small brewers and are propped up by the large distributors in our state, it was a joy working with The Bruery. During Jester King’s startup phrase, The Bruery was a great inspiration. We were encouraged by how they successfully started a brewery without having to make an IPA, a blonde ale, and an amber ale, but rather excelled at challenging palates and creating new flavors through their skill, creativity, and willingness to experiment. Thanks to Patrick Rue, founder of The Bruery, for hosting us at his impressive facility, and to brewer Andrew Bell for helping shape a collaboration beer we’re truly thrilled with! Cheers!