(Orange County, CA)  – The Bruery moves beyond the concept of grabbing a beer, and reaches for something bigger. Share This beer is critical in helping friends become mobile for the first time in Mexico. For every bottle produced, Free Wheelchair Mission receives $1 for their efforts in Mexico. The Bruery’s first installment of Share This: Coffee was highly successful and the team was able to donate $50,000 to FWM’s efforts in the Philippines (which meant 550 wheelchairs!) 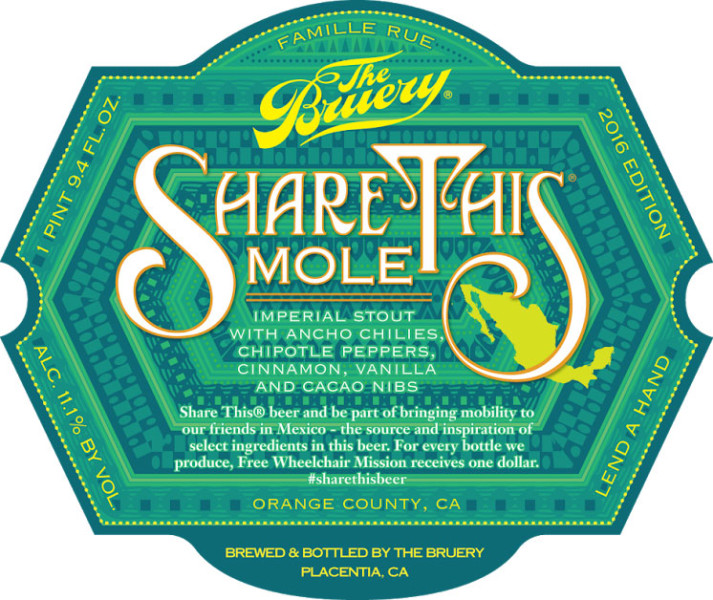 The Bruery looked to the culinary world to provide inspiration for the second installment of their collaborative and charitable Share This® series. Being based in Southern California, we are very fortunate to have some of the best Mexican cuisine in the world. By channeling that local influence and considering all of the high-quality ingredients they could find, Mexico was an easy choice to be the next region. To help The Bruery develop an authentic flavor profile they worked with Chef Anne Conness, herself a Certified Cicerone®. After a lot of hard work (and some delicious tamale pie), Share This®: Mole was born; an Imperial Stout with ancho chilies, chipotle peppers, cinnamon, vanilla and cacao nibs.

Cacao nibs work in unison with their already chocolatey imperial stout to form a savory base perfect to layer flavors upon. A blend of ancho chilies and chipotle peppers provide smoke and a subtle heat character that doesn’t overpower the many nuances that mole sauce is known for. The recipe comes to a decadent conclusion with an ample dosing of fresh vanilla and cinnamon.

Beer drinkers will get a chance to try this incredible beer on November 11th when it officially goes on sale to the public.

To further celebrate this collaboration, The Bruery and Sausal are partnering up for what is slated to be an epic beer dinner on November 16th. Founder & CEO Patrick Rue plus Chef Anne Conness and Free Wheelchair Mission Founder Dr. Don Schoendorfer will be in attendance. You can get a first hand look at the menu below 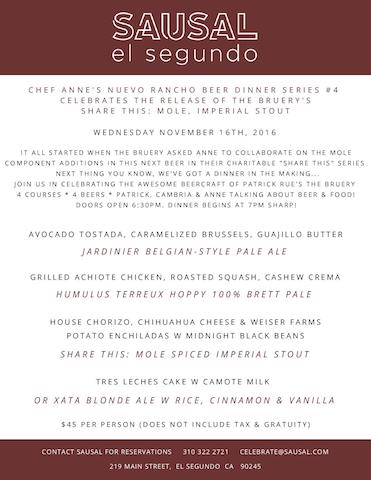 About The Bruery®
Founded in 2008, The Bruery® is a boutique craft brewery located in Orange County, CA that began as a small, friend & family run business by now Master Cicerone®, Patrick Rue. The Bruery focuses on barrel-aged and experimental beers, while its co-brand Bruery Terreux®, launched in 2015, concentrates on beers fermented with wild yeasts and souring bacteria.

SAUSAL is named after Rancho Sausal Redondo [Round Willow Ranch], the vast farmstead that once encompassed El Segundo and most of the South Bay. The name SAUSAL promises the experience of a deep multi-cultural palate reaching back before California was a part of the United States – back when the citizens of Spain and Mexico called her Alta California – and the coast was defined by large, lush Ranchos. The name honors the memory of a fun loving, down-to-earth authenticity reaching back to when her residents enjoyed communal feasts and danced the fandango around an open fire under the stars.

At SAUSAL, Chef Anne works her signature alchemy in forging a Nuevo Rancho Cuisine — one that pulls history forward by blending traditional Hispanic ingredients with contemporary farmers’ market fare. The menu borrows inspiration from the foundational elements of Rancho cooking: Wood Fire, Smoke, and Slow-Roasting; it celebrates the bold flavors of Mexican cuisine in combination with the elemental flavors of Spain – citrus, olives, figs – that were brought here by the missionaries; and just as importantly, it revels in our contemporary bounty — where fresh vegetables and produce are given a more prominent place at the table.

Free Wheelchair Mission is a humanitarian, faith-based, nonprofit organization that provides wheelchairs at no cost to people with disabilities living in developing nations. In collaboration with a network of like-minded partners, FWM has been providing wheelchairs to those in need around the world since 2001, providing dignity, independence and hope through the gift of mobility.