The Bruery Releases Praecocia and Windowsill This Monday 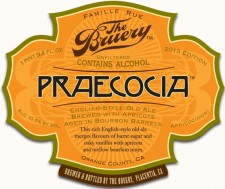 The Bruery has announced two new beers to go on sale Monday, Praecocia and Windowsill.  Read on for complete descriptions of both beers. Cheers!

Praecocia – 10.5% abv. Reserve Society Exclusive
The great philosopher Pliny the Elder referred to the early blooming peach tree as Praecocia; years later these fruit were recognized not as peaches, but apricots.  We took those apricots and added them to a bold, bourbon barrel aged old-ale.  The beer, rich in flavors of burnt sugar and toffee, blends seamlessly with the musky, summer-like experience that the apricots supply. 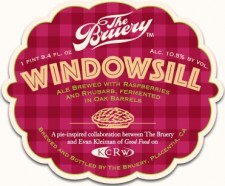 The Bruery after enjoying a homemade Rhubarb Raspberry Pie. The rhubarb’s fruity sourness tempered with the sweetness of the fresh raspberries and the wheat crust, begged to be bottled up in the form of a bubbly beer. Keeping the original pie recipe in mind, specialty grains were chosen to mimic the crust, and rhubarb and

raspberries were used in varying stages of the brewing and fermentation process. The resulting beer is reminiscent of a fresh country pie, cooling on a farmhouse windowsill.