Weed, Ca- The federal government has said no to Weed.

Or at least to the bottle caps of beer brewed at a popular local brewery in this small Siskiyou County town, which has a name that no doubt would have kept 1970s pot-smoking duo Cheech and Chong giggling.

Weed brewer Vaune Dillmann faces possible sanctions or fines from the Alcohol and Tobacco Tax and Trade Bureau if he continues to brew and sell beer with bottle caps printed with the label “Try Legal Weed.”

Bureau spokesman Art Resnick said Monday that the bottle caps tell consumers to support an illegal drug — a policy that violates rules of the Alcohol and Tobacco Tax and Trade Bureau as well as the agency’s predecessor, the Bureau of Alcohol Tobacco and Firearms.

Dillmann, who says his bottle caps both promote his beers and the community in which he brews them, has appealed the decision. 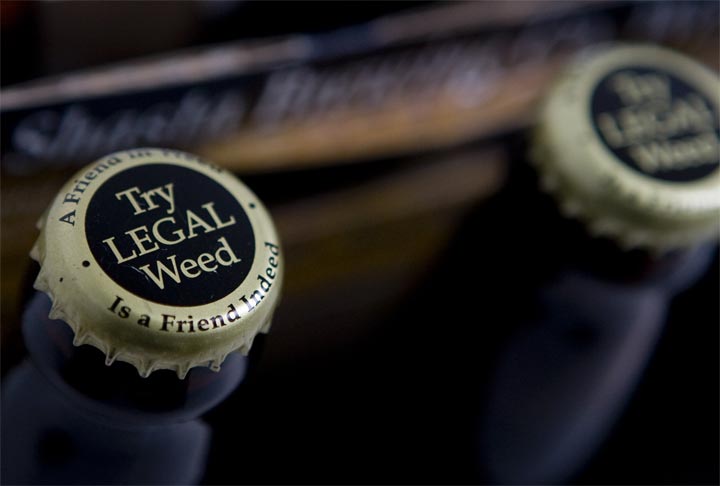 After all, he said, the labels on his beers have a picture of the Weed arch and the city’s founding father, Abner Weed, on the label. Dillmann’s bottle caps also say a “A Friend in Weed is a Friend Indeed.”

“We’re dealing with a surname that’s been used for hundreds of years,” Dillmann said Monday.

The owner of the Mount Shasta Brewing Co. said he’s also outraged that his beer is being singled out for using a possible pot play on words when Anheuser-Busch has used “Bud” — another name for marijuana — to promote their Budweiser line of beers.

For decades, Weed’s name has become synonymous with pot-smoker humor, and locals will tell you it’s a common sight to see red-eyed, tie-dye clad college students posing in front of the town’s Weed highway signs, flashing thumbs ups for the camera.

There also is no doubt that not everyone finds Weed’s name funny.

“I understand there have been movements in the past to get name of the city changed,” said Weed City Manager Earl Wilson “But it hadn’t met with great success.”

Even so, most in the town of 3,000 are used to the name, and some like Dillmann have gone so far as to use the Weed name for marketing purposes.

Gas stations sell “High on Weed, CA” shirts and hats to tourists passing through town on Interstate 5 or Highway 97, the town’s main drag about an hour and 10-minute drive north of Redding.

In a letter to the Alcohol and Tobacco Tax and Trade Bureau’s administrator, Siskiyou County Supervisor Michael Kobseff said California tourism officials have identified Weed as the single most recognized name along I-5.

“Surely, the Alcohol and Tobacco Tax and Trade Bureau is not in the business of suppressing the ingenuity of a small business owner, (and) the community of Weed . . .,” Kobseff wrote.

Weed’s name stems from its history.

Area historians say that in 1897, Abner Weed bought land to start a lumber mill at the site because the area’s gusty winds were perfect for naturally drying log decks, Wilson said.

Fans of California author John Steinbeck recognize Weed as a haunt of George and Lennie, the main characters in his popular novel, “Of Mice and Men.”

Over the years, Weed’s primary industry has switched from logging to recreation at the foot of Mt. Shasta.

Mayor Chuck Sutton said the city’s chamber of commerce has used another play on words, “Weed like to welcome you,” to promote the town.

Article Reposted from: http://www.redding.com/
Reporter Ryan Sabalow can be reached at 225-8344 or at [email protected]