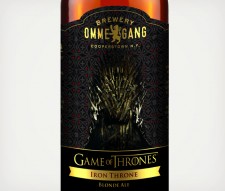 Belgian-style brewery develops Iron Throne, a blonde ale, crafted in the spirit of the hit TV series Game of Thrones®

Cooperstown, NY – Brewery Ommegang and HBO are partnering on a series of beers inspired by the critically-acclaimed drama Game of Thrones. Launching in tandem with the season three debut on March 31, Iron Throne, a blonde ale, is the inaugural beer in the series and the result of a creative collaboration between Brewmaster Phil Leinhart and HBO.

Unlike previous efforts by brewers which were typically executed as ‘brewed under license’ arrangements or straightforward product placement pushes, the collaboration between Ommegang and HBO is focused on developing unique beers that are named and crafted to directly tie into themes and nuances of the medieval-like fantasy realm of Westeros and the surrounding kingdoms, where the competition to sit on the Iron Throne is fierce and deadly.

Both HBO and Ommegang take great pride in a shared reputation for producing the best in their respective fields: award-winning series that are lauded as some of the best written and produced programming on TV, and award-winning beers recognized as amongst the most elegant and well-crafted.

“We are extremely pleased to have selected Brewery Ommegang, while there’s a lot of competition in the marketplace, Ommegang’s expertise and attention to detail in the industry make them the perfect fit for the Game of Thrones brand,” said Josh Goodstadt, Director, Global Licensing, HBO. “Capturing the authenticity, essence and nature of the show, Iron Throne has the richness, quality and all of the elements one would expect in fine ale.”

“HBO has been the definitive producer of high-quality, innovative and ‘water-cooler-worthy’ original programming, and Game of Thrones continues that legacy,” said Simon Thorpe, President and CEO of Brewery Ommegang and Duvel Moortgat USA. “What better partner for our brewery which prides itself on re-imagining the best of beer? Game of Thrones is rich, fascinating, complex, daring and unexpected. Many lovers of Ommegang feel the same way about our fine ales. We think it’s a unique partnership for two unique brands.”

“No one enjoys their job more than I do — producing and developing new brews to delight lovers of fine beer,” said Phil Leinhart, Brewmaster at Brewery Ommegang, “Add to that the opportunity to collaborate on a beer based on the cultural phenomenon of Game of Thrones and exploring ways to make the beer truly reflect aspects from the show. It made us approach development in a completely new way and I think the first edition Iron Throne reveals that. With a Lannister currently on the throne, it made sense to do a delicate, but piercing Golden Blonde Ale with Noble hops. Iron Throne is certainly fair in color and soft in appearance, yet it still possesses a complexity and bite to be on guard for.”

Iron Throne will be nationally available on draft and in 750ml bottles, for the suggested retail price of $8.50 per bottle, beginning in mid- to late-March and will be followed by the launch of additional beers.

Brewery Ommegang, part of the legendary Belgian brewer Duvel Moortgat family, opened in 1997 to craft-brew fine Belgian-style ales. Ommegang creates six ales year-round, as well as an extensive and imaginative range of seasonal and specialty ales. The beers have won a national following by connoisseurs of fine beer and are distributed in 45 states and internationally. Ommegang is located on a 136-acre farmstead in Cooperstown, New York, USA and offers free daily tours and inexpensive tastings as well as a 100-seat café, a well-stocked brewery store, and an annual calendar of public events.  www.ommegang.com – @BreweryOmmegang – Facebook.

About HBO Global Licensing
HBO Global Licensing officially licenses the HBO® brand for the development and merchandising of innovative product lines inspired by the network’s award-winning programming.  With products created around classic series like the The Sopranos® and Sex and the City® to current hits like True Blood® and Game of Thrones®, items include fashion apparel, jewelry, digital and CD soundtracks, games, books as well as exclusive, premium collections in partnership with upscale, designer brands.  Merchandise can be purchased in retail stores nationwide, at store.hbo.com, and at the groundbreaking HBO retail hub, the HBO Shop®, located at 42nd and 6th Avenue in New York City.  HBO Licensing & Retail products are also sold internationally across Europe, Asia and Australia.