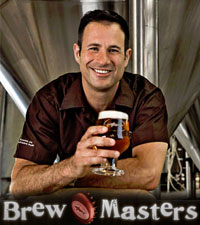 During my last recap of Brew Masters, I definitely felt the show was hitting it’s stride, and any of the cornball factors I experienced in episode 1 or 2 were quickly fading away.  With episode 4, I think the show has found it’s groove.  There were almost no production elements that made the show feel like a slightly forced reality show. This episode had a  great vibe of real documentary mixed with great educational value.  While there are reoccurring roll-ins reminding us the processes used to brew beer, they are doing so in an interesting manner, that really helps someone who doesn’t brew, wrap their mind around it. This show had two main stories, and much like previous episodes, one story arch is about Sam being creative and the other story being focused on Q/A and Production challenges.

Grain To Glass
We follow Sam to the Vacation State, Maine where we find out a little bit of history.  Sam spent summers in Maine, and recalls explaining to his dad he wanted to be a pro brewer.  While out for a run Sam’s dad spotted Dogfish Head Rd, and on the spot, named his sons brewery.  Pretty cool I must say.  In York Maine, a surfboard company exists called GRAIN Surfboards. Ran by dudes Brad and Mike, they pride themselves with making cedar surfboards, in a very environmentally sound fashion. They make sure they keep a harvest of cedar trees going and make good use of their scraps.  Sam loving Maine, loving surfing, and making wacky beer with wood, wanted to take advantage of GRAINS scrap surplus.  He explains to the GRAIN folks that he wants to make a cedar aged beer, so they round up scraps to head back to Rehoboth for brewing.  We get a great look inside the process of nailing this beer down, as we see Sam, Katrinka and Floris trying to see which beer they currently brew would go well with cedar.  They try 90 Minute IPA, Indian Brown and Raisin d’Etre.  They find a winner with Raisin d’Etre and begin formulating the brew, which will be known as Grain to Glass.  OF COURSE, in the end, Sam and GRAIN sample the finished beer together and all LOVE it.

A group of artists known as 5-Ton-Crane erected this amazing metal tree house at the Milton campus. They didn’t get into the cost of this, but it took the 5-ton team a while to get this massive usable metal tree house up.   I don’t consider this a main story arch of the show, but it’s worth mentioning as the final scene with GRAIN Surfboard’s ends in this tree house.

120 Minute IPA
In the beginnings of my craft beer journey, one of my most sought after beers was Dogfish Head 120 Minute IPA.  The beer truly is a beast.  It’s not so much an IPA, as it is a fruity barleywine like beer.  I enjoy its taste and I enjoy the medicinal marijuana head change I get from it, as opposed to a buzz you would catch with strong beer or bourbon.  Part of the beers charm for me was trying to track some down.  It hasn’t made it to the California market yet, so I have to have my dad in NJ help me get some.  According to this episode, and the many updates we have been posting here at The Full Pint, there won’t be any 120 Minute IPA for 2010.

A good portion of this episode was dedicated to Dogfish Head’s Q and A team testing the latest batch of 120 Minute IPA for consistencies with previous batches. We are introduced to their Super Tasters, who look for off flavors or inconsistencies from previous batches.  Each super taster sits in this weird stall behind a small cupboard door. I found it silly, but I am positive there was a good reason for it.  Anyway… Katrinka starts running tests to see whats going on.  We get a great demo on brewing, with emphasis on how yeast works (or not) with high gravity wort. I was really impressed, and I would hope other viewers not familiar with brewing now understand and thought it was interesting as well.

Katrinka tried her best to save this batch of 120, seeing if more live yeast would kick it back into fermentation, but unfortunately tests showed this would not do the trick.  After upper management was informed this batch of beer wouldn’t meet their quality standards, it was sadly decided that the batch had to be dumped down the drain.  To understand exactly how big of a deal this is, this was a 400 barrel batch, that equaled 20,000 gallons, which would have accounted for $500,000 dollars in sales. A half a million dollars of 120 Minute IPA went down the drain, rather than you and I getting an inferior product that might have turned us off to the product.  I wish every brewery could afford to make that decision.  If you believe in karma at all, from that perspective alone, it was a good call.

The Vibe, Additional Thoughts and Questions

As I was mentioning, the show flowed much better, and most aspects of the show felt completely genuine.  I think it focused far more on brewing education, and laid off the marketing/branding aspects of the show. There was no beat the clock scenario, which I appreciated, and none of Sam “worrying” if someone is not going to like his beer.  It was entertaining, informative, and flew by fast. Much like watching the food network, then getting hungry, I am finding myself  more thirsty specifically for Dogfish Head beer.  The show makes it look so tasty. Every time Bryan swirls beer around in that snifter, I want to go pour some barleywine or something.

I would like to part with some questions that you can chime in on in the comments section below.