(Denver, CO)  – In the coming weeks, Breckenridge Brewery will release the Rocky Mountain Sampler 12-pack, featuring its all-new Mountain Series. In addition to three favorite Breckenridge Brewery varieties, the Rocky Mountain Sampler will include a rotating, limited release Mountain Series beer, exclusive to the new package. Each beer in the series will offer a little something different based on the season, specially obtained ingredients, and whims of the brew staff. The Mountain Series celebrates the brewery’s origin as a small, ski town brewpub passionate about crafting fun and adventurous beers. 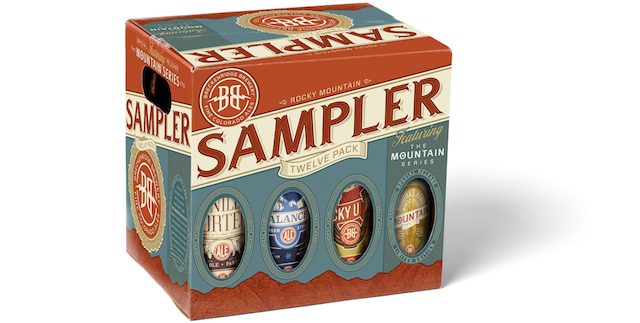 Breckenridge Brewery opened its doors in 1990 in charming and historic Breckenridge, Colorado. The brewery started as a beer-obsessed ski bum’s dream – to brew fresh, quality beer for winding down after a long day of play on the mountain. Breckenridge Brewery has since moved its production facility to Denver and become the nation’s 40th largest craft brewery. The original brewpub in Breckenridge still remains and is now the home of the pilot brewery and workshop. The Mountain Series is a collection of pilot, small batch, and seasonal brews which showcases the unabashed creativity and experimentation that thrives in the brewery’s original Rocky Mountain home.

“The Mountain Series is the perfect way for us to get our rare one-offs and pilot batch beers, which are usually enjoyed only at our Mountain Brew Pub, into the hands of people who can’t make the journey to visit us,” explains Todd Usry, Brewmaster and Director of Operations. “We’ve always wanted to share these unique beers with more people, but we haven’t had the outlet to do so. With the Rocky Mountain Sampler, now we can!”

The first Mountain Series beer to be released in the Rocky Mountain Sampler will be Buddha’s Hand, a Belgian Witbier (wheat beer) brewed with the ancient citron fruit called Buddha’s Hand. This tropical fruit is segmented into finger-like sections, resembling the hand of Buddha. At 6% ABV and an IBU of 15, this ale is crisp and refreshing with a subtle citrus zest making it ideal for summer meditations.

“There will be many more of these extraordinary beers that make their way into the Mountain Series rotation,” says Marketing Director, Todd Thibault. “I’m proud of this exciting new package and the nod to our rustic and storied past.”