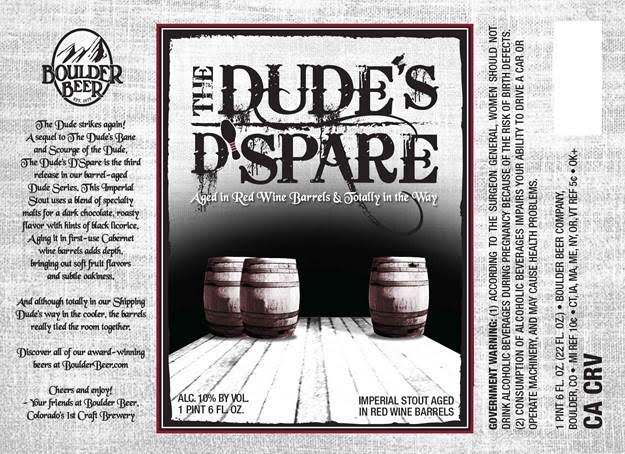 The Dude strikes again! A sequel to The Dude’s Bane and Scourge of the Dude, The Dude’s D’Spare is the third release in Boulder Beer’s barrel-aged Dude Series. This Imperial Stout uses a blend of specialty malts for a dark chocolate, roasty flavor with hints of black licorice. Aging it in first-use Cabernet wine barrels adds depth, bringing out soft fruit flavors and subtle oakiness. The stout rings in at 10% ABV and 52 IBU.

And although totally in their Shipping Dude’s way in the cooler, the barrels really tied the room together.

The Dude’s D’Spare release party will be held on Saturday, November 7th from 12:00 – 3:00pm at The Pub at Boulder Beer. All bottles purchased between 12:00 and 3:00pm during the party will be signed on site by Brewmaster David Zuckerman and the infamous Shipping Dude. The first 150 guests will also receive a complimentary 4-oz pour of The Dude’s D’Spare. All party-goers will be entered to win a VIP party at the brewery with a $500 retail value. Other fun activities include robe giveaways, lawn bowling and a photo booth.

The Dude’s D’Spare will be sold in 22-ounce waxed bottles, available initially only at the brewery. A handful of cases will begin shipping to select markets the following week for distribution at premium craft beer retail outlets.

Founded in 1979, Boulder Beer Company has been a pioneer in the craft brewing industry for over 36 years. Their passion for innovation keeps their brand mix diverse, offering a taste for every palate. They currently package six year-round beers, seven rotating seasonals, and periodically release very limited-edition, small-batch brews throughout the year. Shake Chocolate Porter is currently their top-selling beer.