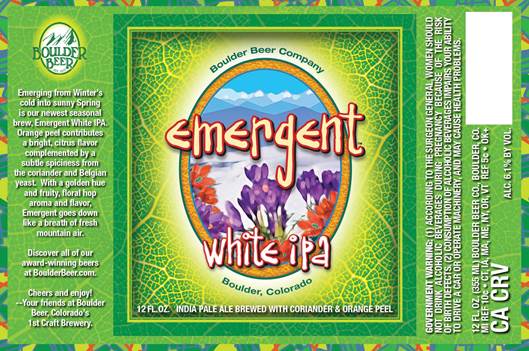 Emerging from winter’s cold into sunny spring is Emergent White IPA.  Orange peel contributes a bright, citrus flavor complemented by a subtle spiciness from the coriander and Belgian yeast.  With a golden hue and fruity, floral hop aroma and flavor, Emergent goes down like a breath of fresh mountain air.

“This is a recipe we’ve brewed multiple times on our pilot system for special Pub events,” said Tess McFadden, Marketing Director at Boulder Beer.  “It’s been a crowd favorite at the brewery and we’re excited to release it on a larger scale for the spring season.”

Emergent White IPA will be available in most markets where Boulder Beer is sold in 12-ounce 6-pack bottles and draught.  It will be available to ship beginning the week of March 2nd and will be out through May.

Founded in 1979, Boulder Beer Company has been a pioneer in the craft brewing industry for over 35 years.  Their passion for innovation keeps their brand mix diverse, offering a taste for every palate.  They currently package six year-round beers, numerous rotating seasonals, and periodically release very limited-edition, small-batch brews throughout the year.