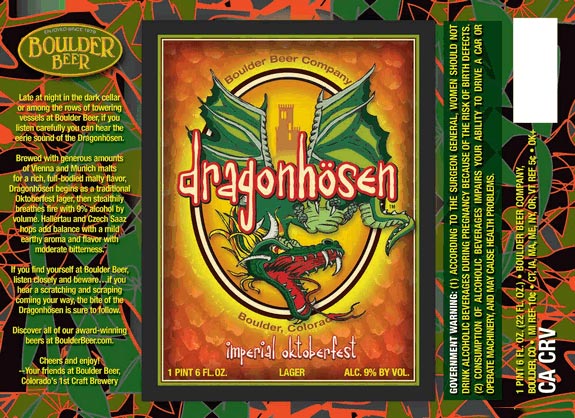 Brewed with generous amounts of Vienna and Munich malts for a rich, full-bodied malty flavor, Dragonhosen begins as a traditional Oktoberfest lager, then stealthily breathes fire with 9% alcohol by volume. Hallertau and Czech Saaz hops add balance with a mild earthy aroma and flavor with moderate bitterness.

“We received such positive customer feedback on Dragonhosen last year,” said Tess McFadden, Marketing Director at Boulder Beer. “The only downside was that it wasn’t ready early enough, so we’re releasing Dragonhosen a month earlier this year to make sure it ships to out of state markets in plenty of time for the full Oktoberfest season.”

Dragonhosen Imperial Oktoberfest will be available in most markets where Boulder Beer is sold in 22-ounce bottles and draught.

Founded in 1979, Boulder Beer Company has been a pioneer in the craft brewing industry for 35 years. Their passion for innovation keeps their brand mix diverse, offering a taste for every palate. They currently package six year-round beers, numerous rotating seasonals, and periodically release very limited-edition, small-batch brews throughout the year.

For more information on Dragonhosen, Boulder Beer Company and their brands, please contact Tess McFadden at 303.444.8448 x29 or at [email protected] .