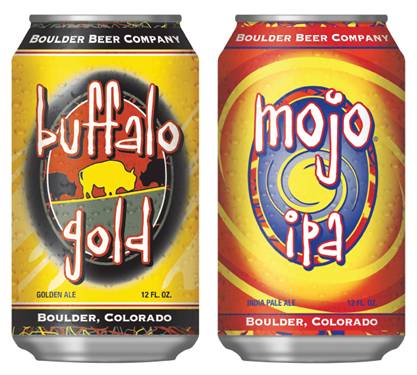 The Buffalo Gold artwork was redesigned for the cans to make the graphics consistent with Boulder Beer’s core lineup of beers. As one of the brewery’s heritage beers dating back to 1989, Buffalo Gold historically has had a different look reminiscent of the brewery’s early days and has predominantly been sold only in Colorado. The graphic redesign of Buffalo Gold coincides with the brewery launching the brand nationally with the release of the new six-pack cans. Moving forward it will be available in cans and draught, but not bottles.

“Buffalo Gold is one of the original session beers and a perfect style for cans – light-bodied and easy-drinking, yet very flavorful,” said Tess McFadden, Marketing Director at Boulder Beer Company. “We’re excited to see the brand grow with the redesign and release to new markets.”

Mojo IPA, one of Boulder’s core year-round beers and a brewery staff favorite, warranted a package extension to cans to satisfy the thirst of the many outdoorsy hop heads out there on the lookout for more canned IPA’s. Boulder Beer will continue to package Mojo in bottles as well as draught. Pale in color but packed with flavor, Mojo’s Amarillo hops create a big grapefruit-like citrusy flavor with a crisp, dry finish.

Both Mojo IPA and Buffalo Gold will be available in 12-ounce six-pack cans to all markets where Boulder Beer brands are distributed. They begin shipping from the brewery next week in time to hit area retailers before the July 4th holiday.

With their recent purchase and installment of a new Palmer canning line, Boulder Beer now has the capability of offering more of their beers in cans. They currently offer two brands in cans – Hazed & Infused year-round and Hoopla Pale Ale in the summer season – which previously were canned using a mobile canning service. Buffalo Gold and Mojo IPA will be the first new can releases since the brewery’s Palmer line began running in April.

Founded in 1979, Boulder Beer Company has been a pioneer in the craft brewing industry for 35 years. Their passion for innovation keeps their brand mix diverse, offering a taste for every palate. They currently package seven year-round beers, numerous rotating seasonals, and periodically release very limited-edition, small-batch brews throughout the year.