Boulder Beer Co. To Release Scourge Of The Dude 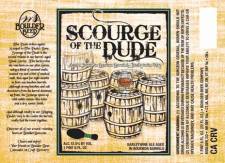 The Dude strikes again! A sequel to The Dude’s Bane, Scourge of the Dude is the second release in Boulder Beer’s barrel-aged Dude Series. This barleywine was born on their pilot system, using a blend of caramel malts, toasted rye and a hint of smoked malt, then aged for eight months in first-use bourbon barrels. Although strong bourbon and oak characters from the barrel dominate up front, the Scourge opens up with subtle raison-like notes and a dry, tannic finish.

And although totally in their Shipping Dude’s way in the cooler, the barrels really tied the room together.

(The Shipping Dude could not be reached for comment; however, a small sigh of relief was heard coming from the cooler as the barrels were wheeled out to be filtered and carbonated.)

The Scourge of the Dude release party will be held on Saturday, November 8th at The Pub at Boulder Beer, when the Pub opens at Noon. Scourge of the Dude will be sold in 22-ounce waxed bottles and initially available only at their Pub. A handful of cases will begin shipping to select markets the following week for distribution at premium craft beer retail outlets.

Founded in 1979, Boulder Beer Company has been a pioneer in the craft brewing industry for 35 years. Their passion for innovation keeps their brand mix diverse, offering a taste for every palate. They currently package six year-round beers, seven rotating seasonals, and periodically release very limited-edition, small-batch brews throughout the year. Shake Chocolate Porter is currently their top-selling beer.