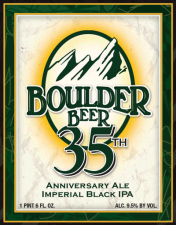 Boulder, CO – As many of you know, 2014 happens to be the 35th Anniversary of brewing for Colorado’s First Craft Brewery – Boulder Beer Company! It is with great pride that we introduce to you our commemorative special release – Boulder Beer’s 35th Anniversary Imperial Black IPA. Packaged in 22oz. bombers, this brew is hand dipped in green wax with a decorative neck ringer.

Dark black in color with a big all-around hop presence, Boulder 35 remains a well-balanced big IPA with a smooth roasted malt flavor. And at 9.5% alc./vol., it’s a perfect beer to share among friends while raising your glass to Colorado’s vibrant craft beer scene, all started 35 years ago.

This limited-edition offering will be available mid-April. The bottles will all be hand-dipped in green wax, with a stylish printed neck ringer strung around the neck with metallic gold elastic string, telling a bit about our history.

Join us in tapping the very first kegs of our commemorative 35th Anniversary Ale during the Craft Brewers Conference in Denver! We’ll have a selection of our tasty libations on tap alongside Boulder 35 to enjoy while listening to the festive grooves of Gipsy Moon playing live during the party.

SAVE THE DATE: Saturday, June 14 – we will be celebrating our 35th Anniversary here at the brewery. Details to come!