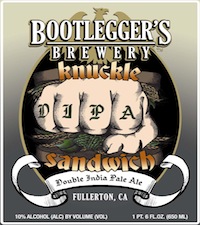 “This is the first time Bootlegger’s Brewery entered this competition since 2008,” says co-owner Patricia Barkenhagen. “We’re extremely proud that our beers took some medals home, and we plan to enter more competitions in the future.”

At the 2008 competition Golden Chaos, which began as a homebrew recipe of head brewer Aaron Barkenhagen, took home the silver medal in the ‘Belgian-Style Strong Ale’ category. In a closed tasting on June 9, BJCP certified judges took on beers in 84 different categories from licensed breweries and brewpubs, during The Los Angeles International Commercial Beer Competition. Bootlegger’s award-winning brews, will be available for public tasting from Aug. 31 to Sep. 30.

Bootlegger’s Brewery, Fullerton’s first packaging microbrewery, was established by Aaron Barkenhagen after 10 years of homebrewing in his garage. In true bootlegger fashion, the first keg was delivered in the back of a pick-up truck and the rest is history. Visit the tasting room at 401 S. Richman, Fullerton, CA, 92832, or for more information about Bootlegger’s Brewery visit bootleggersbrewery.com or find the brewery on Facebook at facebook.com/bootleggersbrewery