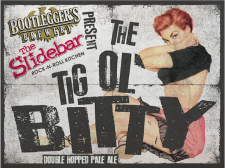 FULLERTON, CA – Purveyors of one of Southern California’s most sought after beer brands, Bootlegger’s Brewery has teamed up with The Slidebar to launch a special recipe to celebrate the 2013 installment of 106.7 KROQ’s Annual Miss Double December Pageant. The tongue in cheek take on the typical beauty pageant is coupled with a live radio broadcast from KROQ’s Kevin and Bean Morning Show and while it has become synonymous with a raucous early morning party, the event also generates thousands of donations for the United States Marines’ Toys for Tots Program.

Playing host to the event for the last five years, The Slidebar, enlisted the help of master brewer Aaron Barkenhagen to craft a unique recipe with the theme of the morning in mind. The result was the TIG OL’ BITTY. Starting as a balanced pale ale, Bootlegger’s brewers then dry-hop it with tons of classic West Coast hops to give it floral and citrus notes. This beer showcases all of the great flavor and aroma of the hops without the bitterness, making it approachable for every beer drinker. Big, bodacious and beautiful – just like the beer.

Available for the first time to the public on November 30th, 2012 – the morning of the live broadcast, The TIG OL BITTY will be in limited release at just two locations, The Slidebar and at Bootlegger’s Brewery in Fullerton. Once it’s gone, it’s gone.

For More Info on Miss Double December Visit The Official Site of KROQ 106.7