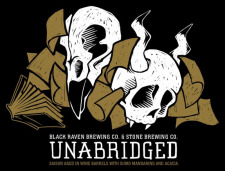 Redmond, WA – “One of Black Raven’s brewers visited Stone Brewing a few years ago and met Steve. The idea of someday collaborating was discussed. In April of 2014, the concept came to life when Steve and Beaux brewed this beer at Black Raven Brewing in Redmond, WA.”

“I’m not sure it really nails a style. The base is pretty much a saison, fermented with a spicy, phenolic Belgian yeast and then aged in wine barrels (red and white). Sumo Mandarin oranges and acacia chips were added during maturation. I think it really is a celebration of both brewers affinity for barrel flavor contributions and some non-typical brewing ingredients.” – Beaux Bowman

Tasting notes (Steve Gonzalez – Research Brewer/Stone Brewing):
“Some pleasing native funk from the wine barrels and tons of citrus up front on the nose. Specialty malt provides some mouth-feel and silkiness, and there is some mid-palate wine and stone fruit coming through. The finish is huge citrus, along with some spicy phenolic flavors from the Belgian yeast.”

This beer will be distributed in very limited quantities to select, local retailers in 500ml bottles.

JOIN US AT THE TAPROOM OR AT ONE OF THESE RELEASE EVENTS: