Raleigh,NC – Big Boss Brewing Collaborates with Olmeca Altos Distillery & Avion Tequila to Create A One of a Kind Beer . With help from friends at the Raleigh Times Bar and the distributors of Avion Tequila, Big Boss Brewing Company initiated an eleven (11) month process of acquiring tequila barrels from Olmeca Altos Distillery in Jalisco, Mexico to create a limited-edition brew called Muerto Viviente- further adding to the brewery’s ‘Strange Cargo’ series. Come celebrate as this specialty ale is released to the masses in a pre-Cinco De Mayo First Friday at the Raleigh Times, May 2 at 6pm featuring beer, tequila, live music, and more! 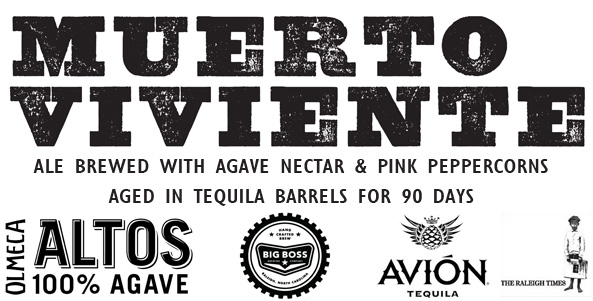 It all started as a ‘what if.’ No stranger to barrel-aging, Big Boss Brewing is always on the lookout for what’s next in this specific trend. A conversation over lunch sparked the eight (8) month acquisition and three (3) month aging process. Eleven (11) months in all, Muerto Viviente was born- a 9% Belgian Dark Ale aged in Avion Reposado Tequila Barrels featuring pure agave nectar and pink peppercorn. The barrels arrived at the brewery around Christmas (only fitting) and brewers Brad Wynn and Bobby McInerny decided on this specific combination to highlight the oak, vanilla, and pepper notes the tequila left behind.

Avion and Olmeca Altos purchase used bourbon barrels from the United States to age their spirits. With tequila barrels being difficult to acquire and in short excess supply, Big Boss is among only a handful of breweries in the US to experiment with this aging process. Excitement over the barrels crossing the border, anticipation of delivery and the thought ‘this is actually happening’ lead the brewery and its collaborating partners to plan an event downtown Raleigh will never forget. The Raleigh Times First Friday draws a crowd worthy of closing off an entire block and with May 2 leading up to Cinco de Mayo it only seemed appropriate to release Muerto Viviente on this date. Representatives from Avion Tequila and Olmeca Altos will be providing samples to event-goers as well for quite the spirited night.

Big Boss Brewing Company was founded in 2006 and shipped its first beer in the spring of 2007. Big Boss came to fruition when UNC alum Geoff Lamb returned to the triangle and combined forces with Brewmaster Brad Wynn who possesses almost 20 years of experience to include several years at Victory, Wild Goose, and Native Brewing Company. Big Boss Brewing first launched its barrel-aging program in 2008 with the use of American bourbon barrels and has expanded its scope to wine barrels and large-scale foeders resulting in ‘Strange Cargo’. The brewery is centrally located just north of downtown Raleigh at 1249 Wicker Drive.

Both Avion and Olmeca Altos Tequilas are owned by Pernod Ricard and distributed locally by Southern Wine & Spirits. Avion Tequila has risen to stardom based on its appearance on the hit show, Entourage, and for its top quality taste which is evident by winning double gold medals at the past two (2) San Francisco Spirits Festivals. Olmeca Altos uses a 500 year-old traditional and artisanal method of harvesting blue agave, the building block of tequila, that consists of a two (2) ton millstone made of volcanic rock bringing out as much sweet and herbal agave notes as possible. Both Tequilas offer un-aged (Silver or Plata) selections as well as aged (Reposado and Anejo) options.

Since 2006 The Raleigh Times Bar has established itself as a timeless, local watering hole. Raleigh’s past, present, and future are on display in this beautifully restored circa 1906 structure that once housed a printing-press for the Capitol City until 1989. The Raleigh Times bar has received recognition as one of Draft Magazine’s Top 100 Beer Bars with detail to their local craft and Belgian selection. An extensive cocktail menu and a focus on exceptional cuisine, featuring hand-crafted takes on classic bar fare, are all newsworthy additions to Downtown Raleigh at 14 East Hargett Street.