(Long Beach, CA and Huntington Beach, CA) – This past weekend, Beachwood BBQ & Brewing invited members of the press and friends of the brewery to their newest location in Huntington Beach, CA.  For those who aren’t familiar, Beachwood Brewing purchased Beach City Brewing earlier this year.  After modifications and right sizing, Beachwood began some production there, and is looking to open the doors shortly. We sent our team mate Javier to do the heavy lifting for us: take pictures  and drink beer.  While there will be no public grand opening, doors will open tomorrow at 3PM, and the first batch of Mocha Machine brewed on this system will be released Friday. We’ve been told the hours will start out at Thursday 3PM – 10PM, Friday 12pm – 10pm, Saturday 12pm – 10pm and Sunday 12pm to 8pm. These hours may be tweaked once they get a feel for traffic.

This past summer, Beachwood Brewing “fired shots” at near by sold out brewers like Golden Road and Ballast Point, by offering an incentive to trade in growlers from the acquired for free growler glass and a discount on a fill. Beachwood has taken it a step further this week with the announcement of the Invasive Species bottle release (see graphic below). This is a direct shot at Ballast Point Brewing & Spirits who recently opened up a destination brewery 6 miles away from the Long Beach location.  If you look at what’s being done, Beachwood Brewing is releasing an IPA, a Grapefruit IPA, a Habanero IPA and Mango IPA which goes head to head with Ballast Point’s Sculpin IPA and other fruited variants.

Of note on this righteous release, you will notice Beachwood Brewing is debuting these four beers in 12 oz. bottles. According to Beachwood, they will begin bottling this and award winning Foam Top Cream Ale, with the goal of distributing 6 packs by year end. 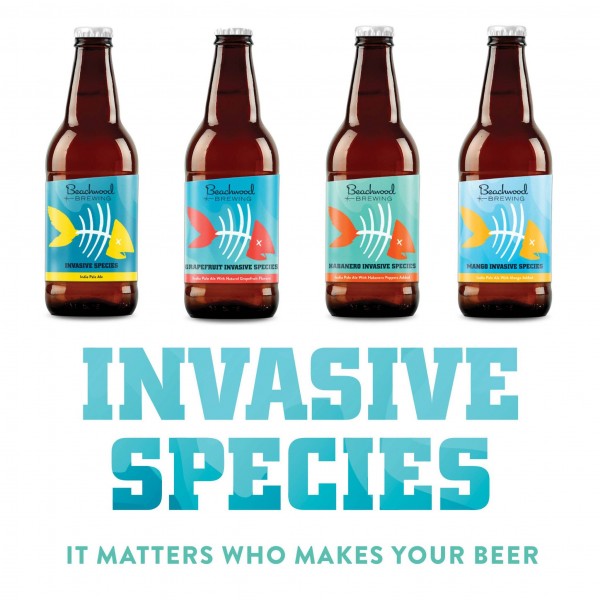