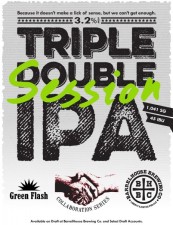 BarrelHouse Brewing teamed up with our good friend (and master of the IPA) Chuck Silva of Green Flash Brewing to create this deliciously sessionable IPA.

Why call it “Triple Double?” Because, it makes about as much sense as “Session IPA!” To us, the phrase “Session IPA” is a contradiction in itself. This ‘new’ style is just a heavily hopped pale ale, but there is something about the letters IPA that makes our mouths water. We also believe in giving the people what they want, which is a truly sessionable beer with an enticing aroma, big flavors and a crisp clean finish. This is the perfect big, little beer for all you hopheads.

As part of our “Small Batch Barley and Hop Project” this collaboration brew is incredibly limited and only available on draft.

The Triple Double Session IPA launches in our taproom last week and Select accounts throughout California over the next few weeks. We’ll announce details as they become available.