Avery Set to Release No. 7 In Barrel-aged Series – Dihos Dactylion 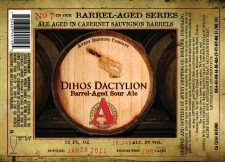 Experimentation. Ales and lagers that defy styles or categories. This is what we are about: our driving force, our passion. To further facilitate this innovative spirit, we’ve developed our Barrel-Aged Series where anything, and we mean ANYTHING, goes! Brewed for those as adventurous as we are!

Flavor Profile:
Aged for eighteen months in fresh Cabernet Sauvignon wine barrels, Dihos Dactylion features a primary fermentation using a proprietary blend of saison yeasts, a secondary fermentation of our house brettanomyces wild yeast strain, along with lactobacillus and pediococcus bacteria added to sour things up.  Dihos Dactylion bursts with aggressive aromas of red wine and a touch of brett; delightfully sour to the taste, initial lactic acid flavors hit high in the cheekbones before transitioning to complex layers of soft fruit, oaky-tannins and red wine.

Don’t live in Colorado? 200+ cases of Dihos Dactylion will be put up for grabs from the Avery Tap Room on 2/25.  If any remains unsold after the release, we will allocate it among the best Avery beer bars and bottle shops around the country.