(Detroit, MI) — Just in time for the holidays Atwater Brewery, Detroit’s favorite craft beer brewer, is introducing a Christmas drink guaranteed to make Santa even jollier after he completes his rounds and unbridles Rudolph and company — Lebkuchen Christmas Ale.

Exactly what is Lebkuchen Christmas Ale? It’s a specially brewed spiced beer that uses a Maris Otter pale malt that brings a bit of sweetness with a honey malt at it’s center. The Ale uses a very light spicing of ginger and almond to brighten the ale and bring forward some of the sweetness and honey notes.

The beer is styled around “der Lebkuchen”, a German Christmas cookie with a storied history, and it’s wrapped in a Christmassy red sweater motif that would look right at home under any Christmas tree. 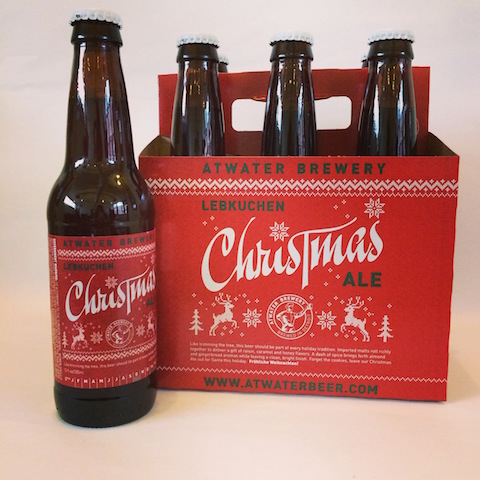 “Legend has it that the Lebkuchen honey cake traces back to the Egyptians, Greeks and Romans and was a gift of the deities that had magical and healing powers,” Atwater owner Mark Rieth says. “We’re not saying our beer is magical or has healing powers but we know that it’s unique and refreshing and will add a lot of spirit to any holiday festivities.”

Atwater plans a limited production run of the new Christmas Ale (ABV 6.5%, IBU 28) to be distributed across 23 states this holiday season.

Atwater was established in 1997 with a mission to “bring Detroit everywhere”. Since its founding, the brewer has set production records ten years in a row, completed a major expansion at its original site in the Rivertown District, and is researching potential sites for two new brewery operations planed for the next two years. Atwater in the Park, its brewery with a bier garten and tap house, which opened in June in Grosse Pointe Park, MI., was recently named one of the top ten beer halls in America by Trip Advisor’s Jetsetter.com.

“We’re having a good run,” says Rieth. “The launch of our Lebkuchen Christmas Ale is a great way for us to celebrate the end of another really good year.